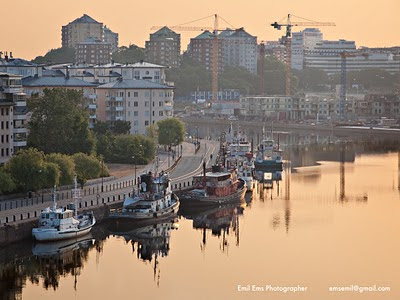 This is a year of climate excesses, at least in Sweden. You may recall last winter, so harsh and snowy that Stockholm was shrouded in white from December to March ("Midwinter-night cold is harsh"). We now are approaching the opposite end of the scale, with summer heat reaching record values of 35 degrees and above, unheard of since at least 15 years back.
Yesterday I returned by train from Scania in Southern Sweden, where I visited some friends at their summer cottage. The trip normally takes about 6 hours (Sweden is a big country). But due to the heat, fires on the track and loss of power on the rails, the train was just standing at a station for four hours, awaiting the signal to proceed. Fortunately there was air conditioning on board. Eventually we got moving again and I arrived back home in Hammarby Sjöstad around midnight. The trip took as long as my trip home from Chicago a month ago!
After a couple hours of uneasy sleep the sun found its way through the curtains and touched my cheeks, reminding me that another long sunny day was in the making. When I went out to the balcony, at 4.30 in the morning, Hammarby Sound (Hammarby Sjö) lay completely quiet in the golden glow of early sunshine. The water was subdued and acted as a mirror for the yellow gleam of heaven. The heat was still bearable, but already above 20 degrees and rising. Another glaring day in the making, a treat for the sun-loving Swedes!
Posted by Emil Ems at 21:52

Dear Emil thanks for keeping us posted,

In case you haven't heard the news from Germany, most modern German designed and made rapid trains failed to provide air-conditioning during the extreme temperatures of late. As in a modern train one cannot open any window or door, inside temperatures went up to >50° and people collapsed, showing signs of dehydration and starting to hyperventilate …

In winter they also suffered from "extreme" weather when it was heavily snowing and the snow got into the engine rooms where is was melting, causing short-circuits …

As I am one of the few who still believe that there is some truth in climate change predictions (and that not all figures are invented by scientists of bad will, criticising the economic system), I am looking forward to drinking a grand cru of good Swedish "rioja wine" or Beaujolais or what ever it may be called …

I have to do my biking here in Brussels early in the morning (today at 6h10) when temperatures are still between 20-25° and ozone levels below limits.

So let us enjoy the treat of next winter coming soon (more heavy snow, cold and long nights :-).