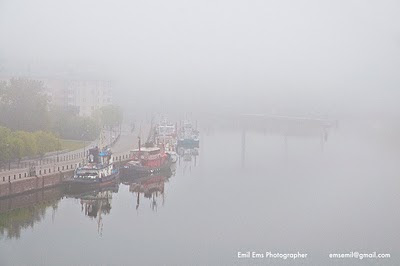 Yesterday was one of those days; rain falling from morning to evening, sometimes mitigated down to drizzle, but never relenting and continuing well into the night. This of course invited a preponed sleep-in, with the sound of steady dripping drowning other evening sounds and creating a somnolent atmosphere. But, around 5.15 AM, I was suddenly awake, wondering where the steady dripping had gone to. The rain had stopped and a serene quiet reigned over Hammarby Sound (Hammarby Sjö). Still half asleep, I sneaked out to the balcony for a check of weather prospects for the newly born day. Well, there was not much I could see. The warmth of the early sun rise had created, in the humidity after the rain, a lofty blanket of fog that enveloped the Sound with its airy cotton, allowing just glimpses of boats and quay in the near distance.
We are now experiencing the normal Swedish High Summer, with rainy days occasionally interspersed by sunny interludes. The continent is heating up, especially in its Eastern ranges far into Russia. Out there in the Northern Atlantic, the water is also getting warm, with corresponding influences on the air above. The front between these two masses of warming air is building Lows that typically migrate over Scandinavia, with Sweden being the final recipient. The result is cloudy days and rain, lasting until the clouds have fully disbursed their watery burden; whereupon there is a brief respite, with a few sunny days, until there are new clouds filled with moisture to disburse. This battle front of air masses striving for supremacy is governing the Swedish summer well into August. First when temperatures are starting to abate on the continent, is there hope for a new sunny period, albeit shorter and later in the season.
Posted by Emil Ems at 21:38

You are not only brilliant photographer, Emil, but also an excellent poet!
It's always so nice to hear (I.e. read) from you
Sana (under the pile of state aid dossiers, but still finding a minute now and then to look into your web-site!!)

Your view is beautiful! Even in rain. Congratulations.