CALM AFTER THE STORM 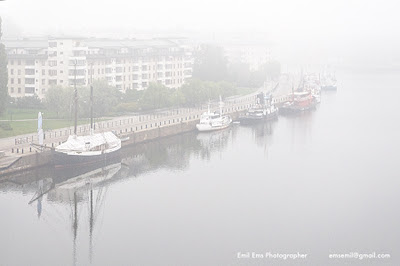 I woke up rather late today, on this calm and slightly hazed morning, after having slept only a few unruly hours.  More about the bad sleep later. Let's begin by enjoying the scenery, put on record around 8 AM! The air was completely still, not a sound to be heard, no boats, cars or buses disturbing the serene Sunday morning peace. The Sound felt fresh and anew again and I regained the feeling that life was good.
What a difference to the evening before! The business community of Hammarby Sjöstad had implemented its long-time plan to organise a "Harbour Festival" along Hammarby Sound. This turned out to be a pêle-mêle of tents, events for kids, sailing lessons and what have you, with a lot of ruckus along the unbuilt stretch of beach starting some 100 meters east of my apartment. During day-time, this was quite an enjoyable event, even if I did not have any special inclinations of participating in the crowdy pleasures. Problems started at sun-set, when a band started to play, to entertain an, after all limited, crowd of restaurant eaters and, in general, listeners on a small opening just below the old Luma factory. The music would not stop all evening, getting louder by the minute. Even after closing all my windows (each of them with three glasses and quite sound-proof) it was impossible to hear the television set. Huge waves of terrible noise wallowed across the sound, disturbing half of the population of the Southern Island opposite us, and was thrown back to us with a vengeance as a monumental echo from the buildings and hills you usually see on my pictures in this blog.
It may interest you that Hammarby Sjöstad is proud to call itself the foremost example of environmentally sound management of all the boroughs of Stockholm, if not Sweden. It does not seem to have occurred to the arrangers of this outrageous evening event that reasonable calm is an important element in an environmentally sound city. It has to be considered as quite irresponsible to subject tens of thousands of peaceful inhabitants (on both sides of the Sound!) to noise far beyond the standards permitted even in heavily trafficked cities, just to impress on a limited crowd of active listeners who certainly can be counted only in the hundreds! It would have been very easy to turn down the loudspeakers to, say, half the volume used that night, leaving us other tens of thousands to have some reasonable quiet in our apartments.
There, this gave me the occasion to vent some anger! Let's finish this "tirade" with another serene morning picture, taken in the other direction. Fortunately the pandemonium went on only for two evenings; let's hope that sound reason will prevail in future, whatever festival would again be organized along Hammarby Sound. 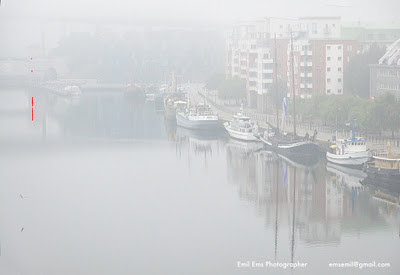 Dear Emil,
I agree with you in every respect! What do do in view of next year's harbour festival??

If you cannot beat them, why not join them!