A SHIP HAS LANDED 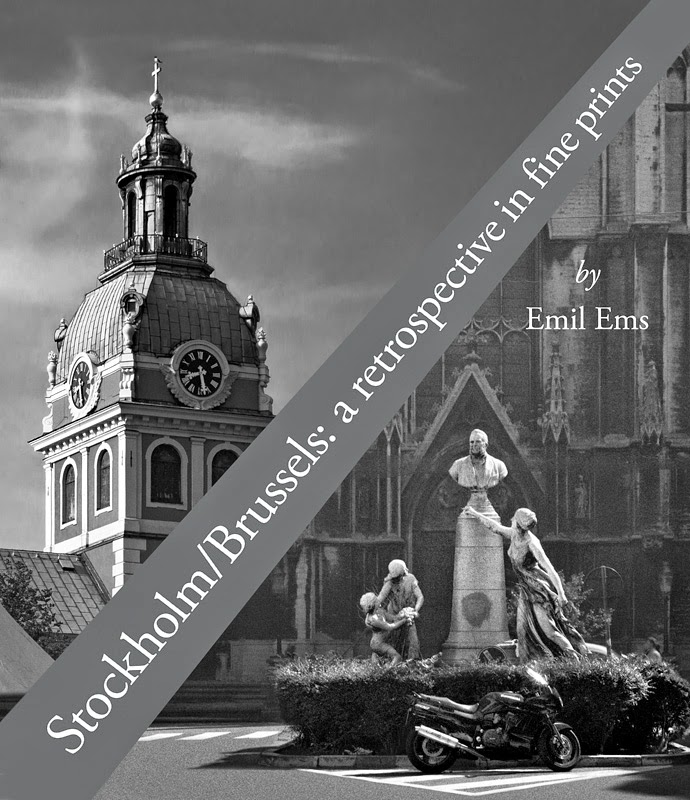 A year goes to its end, a year full of challenging tasks from my part. Why challenging? To answer that question, I have to go back in time, to spring 2008.

Back then, I was in a quandary: should I retire from my position at the EU Commission in Brussels? My ordinary retirement date would be 31 December 2009, but why wait so long? Moreover, given that I could retire earlier, what should I do with the seemingly endless spare time that I would be facing, stretching at least five years into the future?

To make a long story short, I decided to leave work in May 2008, since I felt I was still in reasonable shape and ready to take on new tasks. The main task I had in mind was to take count of my challenging life as European migrant and to report back my findings to a (hopefully) interested public. For that I had to re-invent myself as digital photographer and designer as well as author, since I felt the urge  to make something of the thousands of negatives that had been resting peacefully in cupboards, awaiting their ascension to pictures in print. 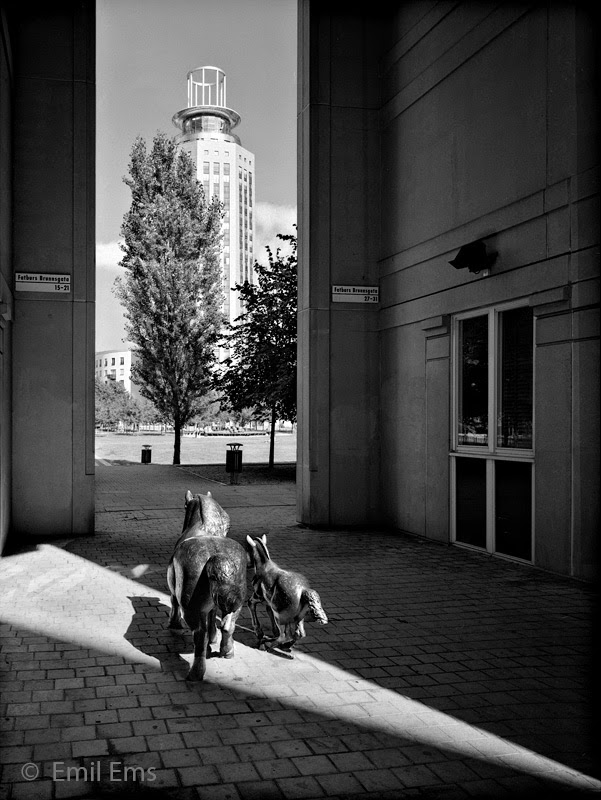 Once the decision was made, I scheduled an appointment with the Head of the Commission's Unit for Capital Movements and Financial Integration, where I had spent my last working years. Into his room I strode, with a big photographic book in tow. It was a rather heavy tome, called "Ansel Adams at 100", the ultimate retrospective of a famous photographer who happened to be my spiritual mentor. With a heavy "thud" the tome landed on his desk and he was rather surprised to see it. When I opened the book, he was amazed further to note two of my own pictures inter-leaved on the mid-spread.

I asked him whether he thought that my pictures would deserve to be placed in a tome like that. He was too polite to say "No!", so I immediately followed up by stating that I had the intention to produce a book like Ansel's, but that it would take me at least five years to do so. Finally I asked his understanding that I had to leave the Commission forthwith, in order to finalize this great project within the life-span that remained to me.

The Head of Unit was flabbergasted and sorry to see me leave, but I was quite satisfied to have managed a grand exit. Since that day, I have spent an unordinary amount of time on this project. I am glad to say that I eventually got my act together and managed at long last to see this project to its fruition. On the desk in front of me lies now a manuscript containing some 60 pages of tales from the two cities – Stockholm and Brussels – where I spent most of my life as grown-up, inter-leaved with some 120 pictures I have taken there during my life-time. Once printed, this will turn out as a tome as heavy as "Ansel Adams at 100", quality comparisons aside ;–) 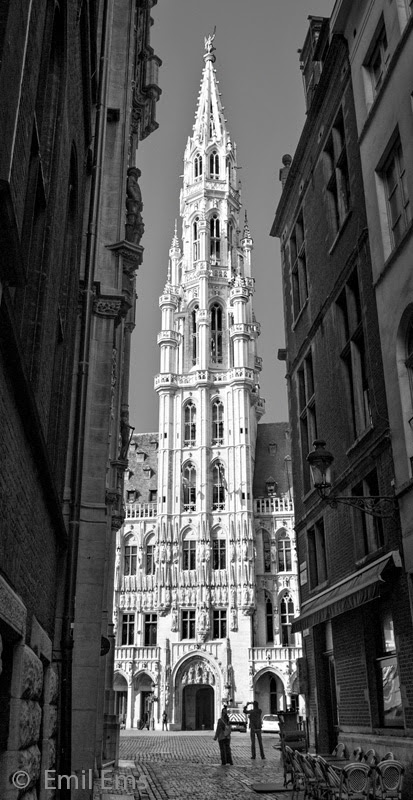 I should be a happy man, were it not for the small matter of financing! High quality printing of black/white photographs is very expensive. So some time will have to be spent after New Year to find sponsors for the "grande oeuvre". I will be looking for organisations or agencies willing to share part of the printing costs and who will receive, as reward, a commensurate number of copies, to distribute to their contacts. All good ideas in that regard from you kind readers are of course welcome!

UPPDATE: The finished book can now, from abroad, be ordered from my website emsvision.com. Swedish readers can buy it from BOKUS or Liten Upplaga.

But why worry about the future? There are more imminent pleasures to savour! New Year is approaching with "Siebenmeilenstiefeln". The champagne is in the cooler; snacks already on the table; neighbors are gathering on their balconies; and some timid sparks of light are announcing the great spectacle of a firework, which we are privileged to admire over Hammarby Sound whilst another year is taking its first timid steps. So let me take this occasion to wish all the hardy readers of this blog:

A Happy and very Prosperous New Year, Emil! Your first steps into the new "thud" are already taken and I do wish you good luck with your work! The pictures I have already seen are marvellous as always!

Happy New Year, Emil, and best wishes for the continued publication of your superb photography!
Lillian

Dear Emil, I wish you all the best for your future photographic work and a Happy New Year! Thank you for your interesting blog!
Best regards, Wilfried

Dear Emil
Oh yes, I remember that meeting very well. It must have been around noon on a sunny Spring day. Of course, I was sorry to learn that you were leaving us. What did you expect? You were a great colleague and a pleasure to be with. The whole team was great. It was a sort of a dream team that did a lot of great things together, but most importantly, I think we all had a great time then. Didn't you? Have you forgotten the our discussions on just about everything?
But I was not the only one who felt sorry on that date. Ken, Ute, Klaus, Charo, Anne Marie, Arianne, ... we all knew how much we were going to miss your very personal comments in our daily coffee breaks. And we did.
But one day, we stared getting your pictures and your blogs and from that moment on, you have managed to keep us together in some way even when you were in California, Sweden or the Canary Islands, Ken was in the US or in Ireland and Arianne was on maternity leave.
So thank you for this!
Just one comment: I was not flabbergasted. I was certainly impressed by the quality of your pictures. But I did know that you had a very rich life to enjoy either taking pictures, editing you books or writing poetry, or whatever. We both knew that you were making the right choice, no matter how much I regretted seeing you go and how much you enjoyed the idea of replacing the Norwegian waterfalls by the California Valleys.
But there is something you tod me that I did not believe then and still do not believe now. You said that you did not want to be an economist any longer. Have you managed to do it? I do not think so. I am sure that you must have been reading some stuff late at night or sneaking to look into the events of the financial crisis remembering something pertinent that Irvine Fischer wrote a long time ago and everybody but you have forgotten.
Please keep in touch
Paco

dear Emil,thanks a lot for your commitment and endeavour ! l wish a heap of luck and success in 2015 to both your book (I 'm looking forward ordering it when it is out ) and yourself - please continue as in the past.
-
Günter
PS We do not know what future holds or us but one thing is sure we will be much more delighted with your book than with much "foresighted" economist-bankers ��

Always nice to read your articles. Maybe you should include US publishing houses/organisations in your quest for a publisher/supporter, as sophisticated readers there may just as easitly appreciate a book of beautiful photos (or should I say artworks) and written meditations on the old world urban landscape.
Thorsteinn

Happy New Year!
Thank you for your very entertaining blog, my wife Andrea and I enjoy it very much, and admire your photos.
Glad to hear your photographic book is about to be completed, good luck with your quest for sponsors.

It was really nice to meet you in Stockholm about 3 years ago - I hope we will meet earlier than another 3 years! I would be happy to meet you if you happen to come to Brussels.

Wow! A record in number of comments this time! I am uplifted and encouraged by all your nice words, dear friends and former colleagues!

Ludwig, it honors you to think so highly of me as an expert in financial affairs. I gather that my knowledge in this field is much less prominent than that. The great financial institutions in Europe couldn't care less about my retirement decisions, I am afraid ;-)

Paco, I am thrilled to see your comment, from a former superior, friend and fellow economist alike. Especially since already more than six years have passed since we went our separate ways. You graciously remind me of all the good times we had in our unit, with our former colleagues and now friends. What an exciting unit it was in those days! I am just sorry to disappoint your expectations about my continued activities as economist. Aside from a short time spent as lecturer in financial crisis issues at the University of Stockholm, I am now quite content to let economics take its course without me. After all, nothing new seems to have been written after Fisher's seminal article on debt deflation ;-) What a pity that he lost his fortune in the great depression and never regained it, in contrast to Keynes!

Heinz, thank you kindly for your invitation to write a contribution to your "European Letter" series. Even if the topic of the euro appears pre-empted by now, I could, if you wish, write a small contribution about how it feels to be a European, rather than bound by the limits of the nation state.

Thorsteinn, thank you kindly for your suggestion to look for a foreign publisher. I will keep that in mind, even if I fear that printing costs will be so hight that even those risk-lovers will hesitate to publish this completely unknown photographer! Were I but an Irving Penn or Ansel Adams, prospects would be different!