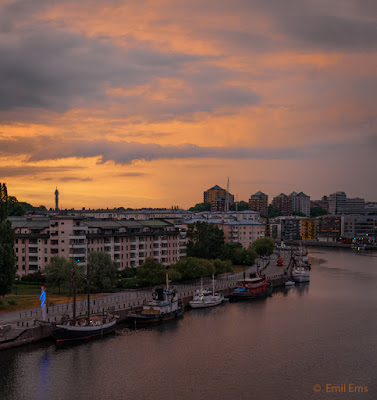 Yesterday evening I witnessed a peculiar spectacle, which I hasten to share with you, dear readers! Around 9.45 pm, when returning from the movies, I took the subway instead of walking home as usual. And I am glad I did. When the train passed the high bridge at Skanstull, where you get a marvelous view of Lake Mälar on the one side and Hammarby Sound on the other, the sky provided an eye opener instead.

It was unusually dark for June, since the sky was overlaid with dark brownish clouds, which completely covered the evening sun. But in a strange way, the sun must have fought its way through indirectly, like using the clouds as a mirror. Over Hammarby Sound towards the East, an unusual rainbow suddenly jumped out of the dark, but only intermittently, partitioned as it was by heavy brown laces. I had no camera with me, so you have to take my words for this. Whilst the train continued its journey, it seemed to creep at snail pace, so full of longing was I to get home immediately and catch this miracle of nature on film.

Unfortunately, the rainbow was long gone, when I arrived at home, 10 minutes later. Instead, the hitherto dark clouds towards the East started to glow, like embers of coal left in the oven after the evening fire. It almost looked as if sunrise would be imminent, even if I knew that the sun was actually setting on the opposite side of the horizon.

Once again I was lucky to witness an Alpenglow over Hammarby Sound. It was not the first time (see earlier blog post), but never had I observed this phenomenon as late as 10.15 in the evening! To show you the difference between Alpenglow and a sunset lit horizon, have a look at the picture below. This was also taken around 10.15 PM, but in the North Western direction, instead of the direction clear East for the title picture. The date was 6 June. Just a week later, I could observe the sun itself, shining like a low spotlight through the trees just to the left of Katarina church, the dome of which is peeping up over the horizon. 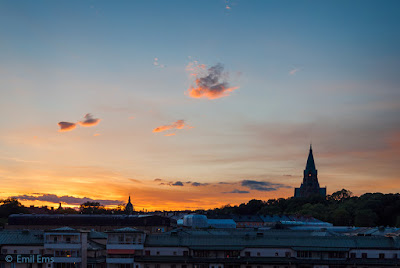 Whilst I was busy documenting this sunset for you readers, a glad "Hellow" was heard from the balcony opposite mine. The distance between houses here in Hammarby Sjöstad is rather small, so we can easily chat from outpost to outpost. The family you can see here is following my blog with interest and always are complimenting me for it. Thank you kindly, dear neighbors! This time they wanted their own picture taken, which I was happy to oblige. If you click on the first of these photos, you get it enlarged. Moving quickly to the next one, the family will come alive, to delight your juvenile side – I hope – as well as mine. Enjoy! 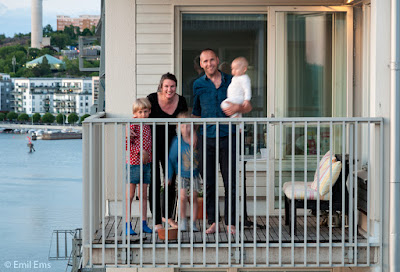 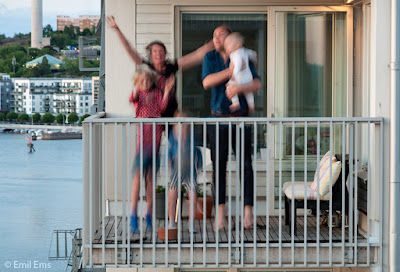 I was taught that alpenglow was the rosy glow on mountains, when the red setting sun still reaches the mountain, but we are in the shadow below.

It is a bit more complicated than that. Unfortunately, there are no mountains to watch from my balcony, so the clouds in the Eastern sky have to make do as backdrop for those rays to be reflected on. Or, to quote Wikpedia,
"In the absence of mountains, the aerosols in the eastern portion of the sky can be illuminated in the same way at sunset by the remaining red scattered light straddling the border of the Earth's own shadow (the terminator). This back-scattered light produces a red band opposite the Sun."