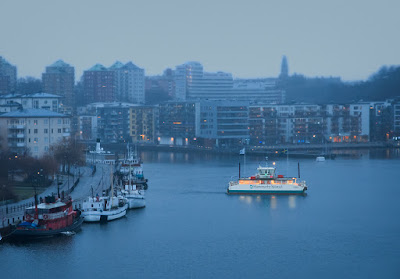 This time of the year darkness prevails during most of the day. Difficult to decide when to get out of bed, since daylight chooses to appear first around 9 am, and that only hesitantly. The other day, I managed to rise a bit early, fumbling around in the dark before turning on all the lights in the apartment to jump start my sleep-drunken mind. During the holiday season, my favorit breakfast haunt stays closed, so I was sitting at my kitchen table, sipping coffee and hoping for Hammarby Sound to emerge from its sombreness.

Suddenly, a ferry emerged, like an apparition, to commence its round-trip on the sound. Out with the camera and, "Clapunck!", the view was preserved for your contemplation. The boat shined like an apparition in the general gloominess and its delicate luminance got me thinking about a carol that we used to sing in our high school choir around this time of the year. In fact, it is the only song I remember from singing at school. The reason being, I believe, that the verses are half Latin, half German, which must have impressed me greatly in those days. 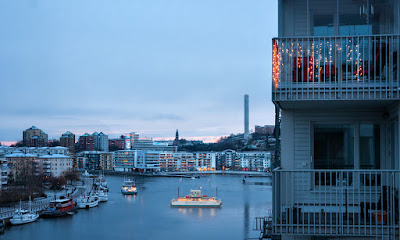 Hearing this song, you would not have guessed that it is more than 700 years old. But it has its roots in the Gregorian Lithurgy, the singsong that can still be heard in catholic masses, at least in the more festive ones. In early middle age, the officiating clergy must have tired of these, let's face it, monotone recitals and tried to embellish them with more melodious outbursts, called Tropi. The song "In dulci jubilo" is a macaronic tropus, with text in alternating Latin and German phrases.

When hearing it performed, it strikes you that it sounds jubilant, indeed. You almost can feel the energy released, when allowing oneself to get rid of the traditional bonds of endless recitals and start singing a melodious song at long last. I am almost tempted to call it the true "Ode 'An die Freude' ".

In this spirit, permit me to finish this post by addressing you all, my faithful and patient readers, with

Thanks Emil for your Writing and introduction of "tropi"! Happy New Year from Costa del Sol!
Dag

A lovely post all round, Emil. Tak!
Happy New Year to you from a very dry California.

Thank you for your marvelous writing! Wishing you a peaceful, hopeful, and joyous New Year, Emil!

Happy New Year to you too! I look forward to receiving your blogs in 2018 and to continuing to enjoy the lovely and ever-changing views from your kitchen window!