No! I am not referring to an ominous party in South America. Neither to a famous climbing path in the mountains of Mexico. Rather, to my daily elations when treading the paths on my morning walking round.

This time of the year, I nurture the habit of going to bed way after midnight. This way, I can convince the body to awaken first around 8.30. when the first light of dawn is tickling my nose. A lazy breakfast later, I am ready to step out into the world, around 9 am, when the sky has definitely lightened, although retaining its blanket of greyness.

Right midway on my morning round, I have to climb a series of steps to gain access to my favourite nature spot: Sjöstaden’s oak grove, the only one remaining within the city limits. You of course remember that I have dealt with it before (see Serendipity), but, passing through it every morning, I cannot keep from mentioning it again. 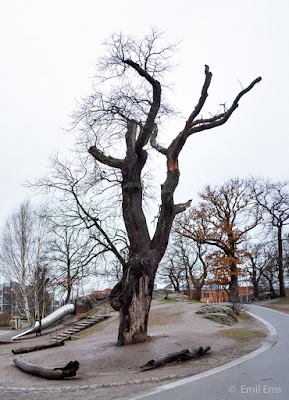 This time of the year, infallibly, when I pass the giant oak corpse seen above, I am enticed to start meditating. This morning again, my mind began wandering, musing about the effects that solitude has on our psyche, in particular the forced one imposed on us by the plague.
For me, surprisingly, living isolated for a prolonged period of time has the particular effect of retrogradation. This may sound ominous, but really isn’t. Rather, it effects me like being peeled as an onion, or, if you prefer, being bereaved the bark like the tree you see above. In other words, the personality I was born with and which stayed with me when a child, and a bit into adulthood, is now slowly but surely reappearing from the shadows.
Thinking back, I can just about recall that I was a rather solitary youngster, quite content to play by my own and let my imagination be my favourite companion. And what a rich imagination I had! When becoming adult, I started to realise that I was an outsider with this propensity and tried to fit in with people my age. It now dawns on me that this must have taken a lot of effort, which may explain a certain decline in internal life, with its imagination and creativity. 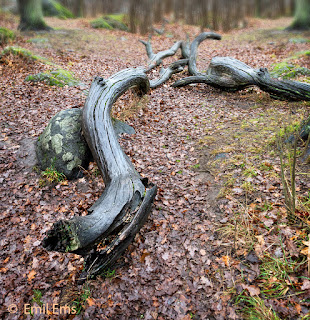 But never fear! It now all comes back to me. And even without giving me a bad conscience for preferring to be alone! It is, as if an enormous weight has been lifted from my shoulders, and imagination now can come to the fore again without being suppressed.
I am glad that the plague came at a propitious time, precisely when I needed that extra boost of imagination. Thanks to it, I was able, this year, to complete fully six chapters of my magnum opus, the Emser Chroicles (see Three Men in a Car ...), a tale spanning more than a thousand years and now, thanks to Corona, already two thirds finished!. Will I be able to untangle the thread fully before the end of next year? I better hurry! Soon vaccination will put an end to solitude and may speedily force me back into my normal and more bland adult personality.
But we are not really there yet! Permit me to enjoy solitude as long as it lasts! Still, whatever the future will bring, we can join hands now and wish each other
A Very Happy New Year! 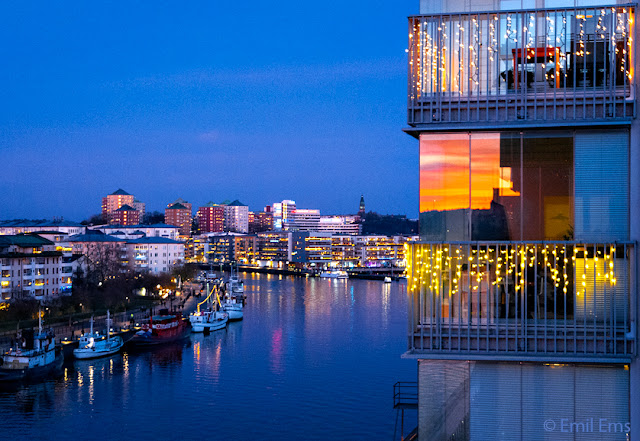 Happy New Year!!! Emil, you are fantastic! How glad I am I came to know you.
Lars

Dear Emil,
A very happy and above all a better new year to you and to all! You have indeed used the passed year to creations beyond imagination! Congratulations! May the new year allow us to hug our loved ones and to resume our normal social life with family and friends!
Kind regards
Eva

and a very happy new year to you, too, Emil!

Linda and I are toasting you with a bit of Bollinger special cuvée. Cheers!

Happy New Year Emil ! All the best for 2021💫
Gerassimos

Thank you Emil.
You are indeed an interesting thinker.
All the best for 2021.
Lars

Happy New Year, Emil.
And may your creativity continue to flow in 2021!!
Warm,jolly festive wishes,
Lesley

Greetings from Berkeley where we are enjoying a most glorious and propitious new year morning.

I recently read that the highly intelligent are far more inclined to solitary pursuits. I like to think that is a good justification for my feeling not very inconvenienced by the plague restrictions. Except for travel of course.

Danute and I are doing the daily NYT Spelling Bee as a way to keep the grey cells engaged.

Thank you for sharing your blogspot with me. I don't seem to be able to post any reply, but at least I can let you know of my appreciation. Also, your post particularly resonated with me, as I am finding myself quite comfortable with the enforced isolation here in the Bay Area.
Wishing you a safe, healthy New Year with continued flourishing of your imagination.
Kris (one of the Stuart Street folks you met long ago)

Wishing you a happy, serene and energizing year of 2021!

All the best
Ariane