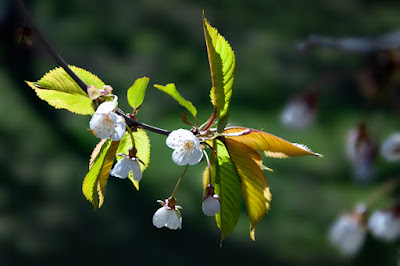 Even if Sweden has been secularised since some twenty years back, Lutheranism, the former state religion, is still firmly entrenched in its culture. Every spring, when youngsters assemble to celebrate, one tune always reverberates through the air in jubilant buoyancy. Only a few of the jubilants are aware of singing a Lutheran choral, listed as number 199 in the Swedish Church Hymnal and sung in Church ever since 1695. I won’t let you be ignorant of the lyrics, at least the starter:
Den blomstertid nu kommer
med lust och fägring stor.
Nu nalkas ljuva sommar,
då gräs och gröda gror.
Blooming season now arrives
with sheer joy and beauty both.
Lovely Summer soon then follows,
lets the crops and forage thrive.
(Home cooked translation: Emil Ems)
This song resounds with particular timbre this year. Many of us now tend to interpret it figuratively. After a loong winter of troubles, with the plague forcing ever more caution and isolation upon us, suddenly, with the help of technical miracles, we are relieved of this terrible burden and can begin to hope for a more joyous future. Just yesterday, the news told us that one third of our population has already been inoculated at least once. Even if the rate of newly infected is still surprisingly high, the death toll is decreasing and intensive care units are getting a long awaited relief.

As if to underline this new beginning, we have enjoyed an especially bountiful cherry blossom season here in Stockholm this year. Cherry blossoms as far North as Stockholm? Yes, indeed! Although not the original Japanese delights, our cherry trees here are of an especially hardy strain, cultivated to endure Northern climates. But, looking at the flowers, you would not notice a difference to the Japanese originals.
In fact, the Japanese community in Stockholm is pilgrimaging to Hammarby Sjöstad (my part of town) in droves every spring to satisfy their cravings for picnicking under a pink flowery ceiling. We ordinary Stockholmers gladly join in, even if most of us are content with ambulating around the trees and taking pictures.
Photographer as I am, I have lived in Hammarby Sjöstad for twelve years now without ever documenting the pink abundance. But this season is different. A new beginning, so to speak, apt to be feted with plenty pictures. So, without further ado, here it is, a small video showing off my home district at its flowery best, accompanied by the venerable Lutheran choral.
Posted by Emil Ems at 12:19

Sorry, Werner. I took this picture from one of the trees that abound with blooms at Hammarby Sjöstad. The full tree can be seen as the first one in the video.
Emil

Dear Emil,
What a lovely combination with the hymn and the cherry trees! Thanks for your beautiful pictures!
Kind regards
Eva

Werner!
I am just now back from a revisit to the tree in question. Interesting results! On the tree’s Western side, which I portraited in the video’s first picture of a cherry tree, all cherry blossoms are of the rich, Japanese, version. In contrast, on its Eastern side, you can find several branches of a quite different version, with smaller flowers and less pink. The title picture in the blog is of the latter variant, since that special branch turned out to be the most photogénique.
Kudos for your sharp gardener expert eyes! You of course immediately pinpointed the right provenance!
Cheers!
Emil

Wonderful video. You sure have a lot of cherry blossom trees. Pretty city. Jerry Fitzpatrick.

Lovely video. My father initiated a planting of ornamental cherry tress on our street when I was a girl. I recall how jubilant they seem when if full flower. Thank you for sharing!