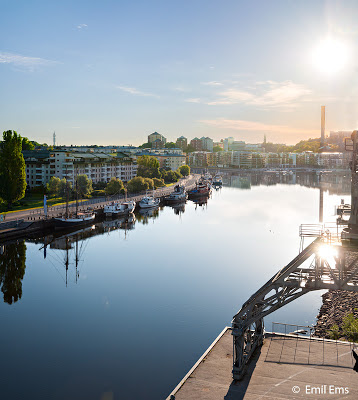 This morning, at 5.30, I tiptoed out into my balcony to admire the views. It was completely calm, not even the slightest breeze to disturb the waters. The wind would be born soon and grow into late afternoon, but for the moment, serenity was reigning over Hammarby Sound. Looking down was just like losing yourself in a giant mirror that replicated the sky above.

This scene brought suddenly a familiar wording to my mind: "Såsom i en spegel" ("As Though in a Mirror"). You know of course that this is the title of a path-breaking film by Ingmar Bergman. In that movie, Bergman's genial photographer, Sven Nyquist, set the tone by picturing a likewise calm sea outside Fårö in the Baltic, which triggered my memory. Of course, there is a difference: the movie was shot in black & white; in calm evening hours; and the sky was clouded. But why let minor differences spoil the analogy? Instead, let's honor the two artists by deleting the colors in the title picture. The mood in this new version is quite different, don't you agree? 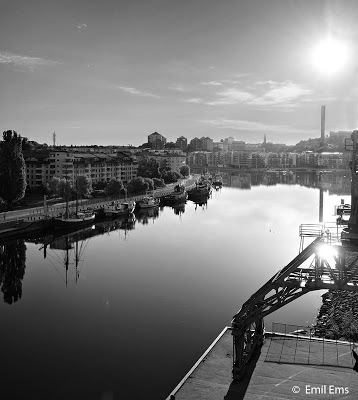 Unfortunately, I can't show you the corresponding scene shot by Nyquist, but this picture from the film at least shows the serene atmosphere of the surroundings. I realize that my humble effort does not even come close to the moody imagery that Sven had in store for us. But he was an artist, whilst I am simply a (hopefully gifted) amateur! 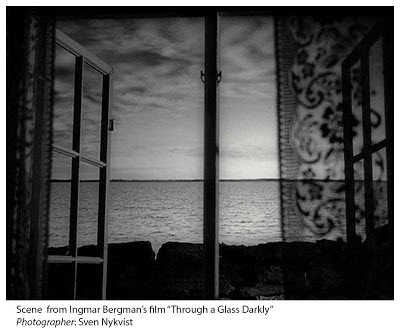 So let's leave the visual arts for a moment and reconsider the title of the film. In fact, its English version ("Through a Glass Darkely") is not really up to the task, in my view. Can we guess the origin of this phrase! No? Well, it could stem from a well known romanticist author. In one of his novellas he is pointing out that the true meaning of one's existence could be glanced only by considering your life to be a theater play. But why not let the author speak for himself:

"... it was necessary to find, in a little world known as the theater, a couple of people who were not only animated by true imagination, true inward humor, but were also capable of recognizing this state of mind objectively, as though in a mirror, and of introducing it into external life in such a way that it should have the effect of a powerful spell upon the great world which surrounds the little world. Thus the theater, if you like, could after a fashion represent the well of Urdar, in which people can look." ("Princess Brambilla", in E.T.A Hoffman, The Golden Pot and Other Tales, Oxford University Press 1992).

Now, this being out of the way, we can present Ingmar's movies in a new light. Let's assume that he had read Hoffman's novella at an early stage in his life; the mirror motive is prevalent in even his earliest pictures. To begin with, they appear only as short cameos, as if the director wanted to just hint at the urge to look inside himself and perceive his true inner being. A good example can be found in his early masterpiece "Smultronstället" ("Wild Strawberries"). 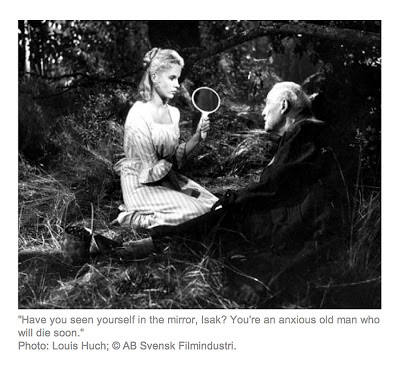 Ingmar Bergman really came of age first with his grand masterpiece, in which the concept of "mirror" was presented already in the film title. Here, for the first time, he allowed himself to look deep into his soul and show the resulting insights for all the world to see. Who in "Såsom i en spegel" could be said to represent Ingmar and his inner thoughts and feelings? In fact, all four of the actors are involved: from the schizophrenic daughter to the introvert father preying on her; from the frigid and hapless husband to the newly awakened boy.

With this film, Ingmar started a sequence of highly personal movies that got him international acclaim. But, in a way, they are but re-hashings of the main theme presented in "Såsom i en spegel" and you could do worse than limiting yourself to see only this of Ingmar's many films. 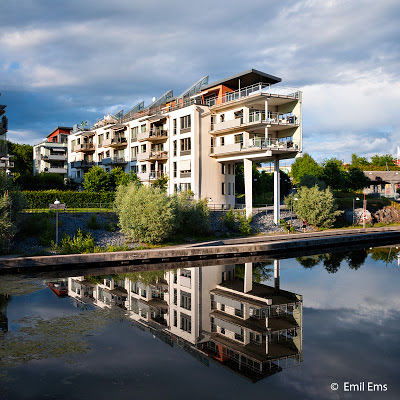 This movie still staying in my thoughts, I wonder whether other folks than great artists have the same ability of introspection. Are there mirrors to be found by us too, allowing us to explore our innermost being and make us, as well as others, aware of the often convoluted and sometimes frightening personality we really are? Of course, I cannot answer for other people. But, come to think of it, my old negatives that I mentioned in Shades of Gray, laboriously acquired in forty years of large format photography, come to mind. Aren't those like small mirrors that permit me to look into my soul? 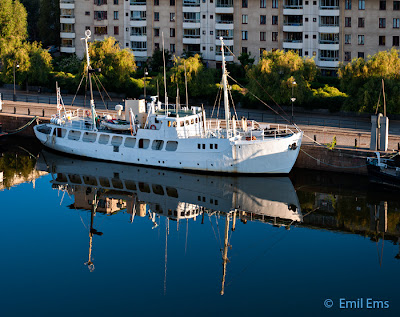 Large format photography is not precisely a spontaneous exercise. After all, you are carrying along equipment weighing 10 kilos or more, which takes up to half an hour to set up before you can begin taking pictures. So the motives you choose don't come out of the blue; you tend to return to the same place over and over again, until conditions are just so to get you a result you can live with. Is it so far fetched to believe that this exercise is being governed by your subconscious and that the result is letting you glimpse into your soul?

As I have told you already in Shades of Gray, I have begun taking out my old negatives of the cupboard and bringing them to life. Looking at the result, I often feel forced to take a step back and consider what I am working on. It is as if I am looking down a deep well (or mirror, if you prefer) and discovering hidden traits in my personality that I hitherto have happily suppressed. To emphasize that point, why not take a look at this picture of an apartment building on Hornsgatan in Stockholm. 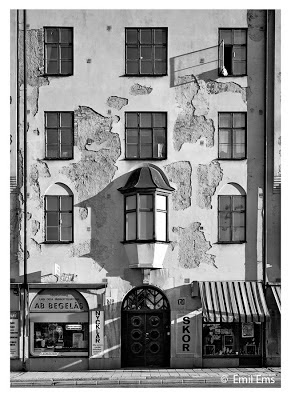 I feel inclined to dedicate this picture to my father. He grew up under atrocious circumstances during the Great Depression and came to adulthood in the inhuman depravations of WWII. Ever since he strove hard to overcome the wounds afflicted to his soul, so that he could shape a decent existence for himself and his loved ones. But, at not so uncommon occasions, you could see the hardly controlled facade cracking and the horrors of yore shining through.

Whom am I kidding? Is it not so that children inherit the traits of their parents? Am I not bound to always keeping a tight control of myself, like my father, to get to grips with a turbulent and hurting interior? Is this picture not really holding up a mirror, showing me my own troubles and despair?

But enough of these intriguing thoughts! Sorrow be gone! Time to cut loose from our journey into the Underworld, "instigated" by E.T.A. and guided by Ingmar. There is a more joyous theme to pursue yet before this post is finished. Have we forgotten that today is solstice day? As I am writing this, the longest day of the year is slowly journeying into evening; the sun is already hiding below the horizon but still in touch with the northern clouds, illuminating them with a rosy shine to raise our spirits from the deeps.

Tomorrow will be a big day of joyous festivities, when the Stockholmians get off their back and hurry out to sea, on boats ranging from the big vessels of the Wasa Fleet to the smallest barges full of festive parties.


HAPPY MIDSUMMER   –  GLAD MIDSOMMAR    to all my readers! 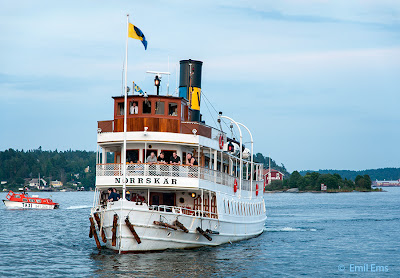 Happy Midsummer, Emil! Thank you for your musings and observations and your thoughtful, luminous photographs.

Thanks Emil for the wonderful writing and pictures. I wsh I could write half as well. I have seen both of Bergmans movies of which you write. And enjoyed them but that was a long time ago. I hope everything is going well for you. Jerry

Dear Emil,
Thank you for your lovely pictures with ships and houses mirroring in the still waters of the Hammarby Sound and your own reflections on the quote (as though in a mirror) and the film by Ingmar Bergman which I have seen in my youth! Concerning the title of your chapter "Såsom i en spegel" I would also like to refer to the Bible, Paulus' first letter to the Corinthians, vers 12: "For now we see through a glass, darkly, but then face to face ..." (Paulus explaining the agape concept). I am sure this also gave Mr Bergman his inspiration.
Happy Midsummer!
Kind regards
Eva

Thank you so much for your valuable comments.

And, Eva, following your analysis of "Through a Glass Darkly", I stand enlightened, but not sure whether I am standing corrected. I was not aware of the English phrasing in Paulus letter to the Corinthians but it is evident now that this Bible phrasing was used for the English title.

That notwithstanding, whereas the English title follows the Bible wording verbatim, the Swedish and German titles follow the Hoffman wording verbatim and appear to me rather remote (also as concerns the wording's meaning) from the Bible phrase.

Ingmar Bergman is not among us any longer, so he cannot resolve this riddle for us. But maybe a Bergman expert will come forward to enlighten us further.

Dear Emil,
I am returning to the quote "Såsom i en spegel" which is generally considered to be taken from the 1st letter to the Corinthians by Paulus, here in the Swedish translation: "Nu se vi ju på ett dunkelt sätt, såsom i en spegel, men då skola
vi se ansikte mot ansikte. Nu är min kunskap ett styckverk, men
då skall jag känna till fullo, såsom jag själv har blivit till
fullo känd." Probably it is possible to go back to Ingmar Bergman's own note book in which he carefully described the scenes in his film and his thoughts about them. However, as you say, Emil, Mr Bergman is not here to answer our question! No matter where the quote has been taken from, your gorgeous pictures definitely reflect the quote in a marvellous way!
Kind regards
Eva

Hi, I am back! I have to confess that I am not a religious man, but Paulus' Letters to the Corinthians kept me going nonetheless. After some more research, it emerges that there is yet another passage in the second letter (Chapter 3 Verse 18), which comes rather close to what Ingmar chose as title:

"18 But we all, with open face beholding AS IN A GLASS the glory of the Lord, are changed into the same image from glory to glory, even as by the Spirit of the Lord."

However, most importantly, I admit that a viewer should interpret the MOVIE as it moves him the most, rather than try – as I did – to establish what Ingmar really HAD IN MIND when he produced it. Many artists prefer to remain silent on the purpose of their work precisely for that reason