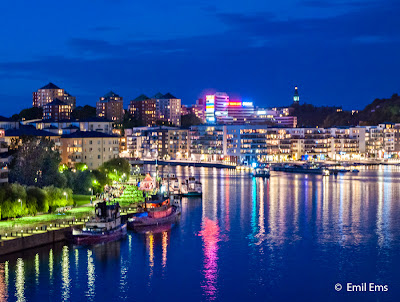 Summer is approaching its end, but the "Latin" enthusiasm of Swedes is not yet abating. Have a look at the picture above, taken yesterday around 11 pm. You may believe the greenery along the quay to be a new park in the making. But, "No!", you are in fact seeing some thirtyfive thousand people rushing by during the annual Midnight Run around the Southern Island of Stockholm. 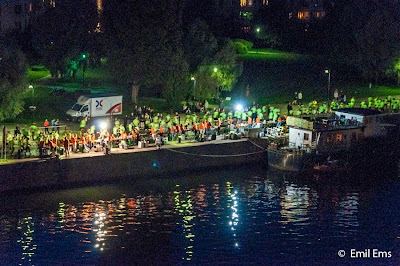 True to the time-honored tradition of being exuberant in Summertime, this extraordinary event is accompanied by an enormous ruckus, with many more spectators than runners, filling the Island to the brim. Long after the Run is finished, the air is vibrating with the sound of festive ululations, keeping us more sedate citizens awake until early morning. 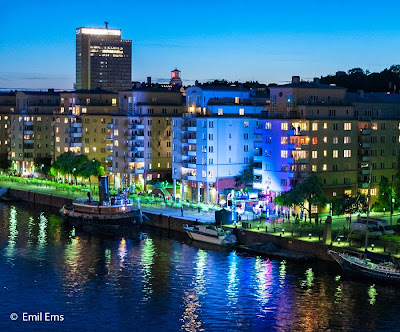 This year I decided to take the devil by the horns and spend the evening and night with preparing a blog post, instead of throwing around in bed in a vain attempt to get some sleep. This turned out to the best for all parties, don't you think, and I may repeat the exercise another year. Better to use the event for some creative output than to keep getting angry at the outbursts of the "Summer Swedes". 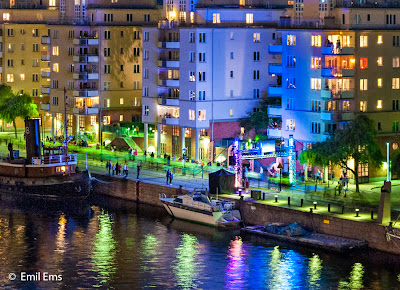 Soon enough everyone will reconvert to their more natural "Nordic" temperament and cool restraint will again be reigning over Hammarby Sound. When I went out to the balcony early this morning, bleary eyed from keeping awake, I was very astonished to see that the cleaning crew had already been out in the wee hours: not a single sign of the night's excesses was visible along the quay opposite my apartment. And the morning sun greeted me with abandon, as if telling me that Summer was far from over. 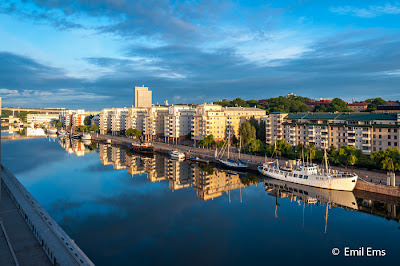 But let's face it! We live in the North after all. With September approaching, it is best to start freshening up the odd pullover and warmer trouser. But, "Wait!", don't forget that there is one last occasion to indulge in exuberant "Summerism". This time I myself will be the cause of it. Next Saturday I will invite family to the annual big event in Hammarby Sjöstad, the Emil Ems Crayfish Party. 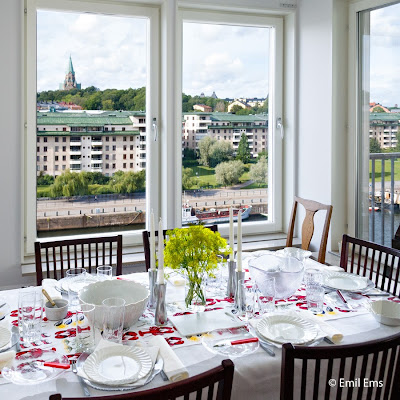 You didn't know that us Swedes love to eat crayfish in August? Well, this is a time-honored tradition, ever since the days when the fishing season for this delicacy began first in August. We will indulge in those red little creatures, swimming in their tasty dill sauce and certainly won't forget to welcome each of them with high spirits or, rather, with strong spirits from glassy containers.

Having said this, we should not forget to thank these little creeps every time we take a sip and sing a song to go along with it. Without them, no doubt, there won't be any strong spirit to consume in Sweden. Back in the beginning of the Roaring Twenties, the abolitionist movement in Sweden was in full swing, and a referendum on alcohol prohibition was held in 1922. The opponents won only with a slight margin, and only one single picture helped to sway the undecided. It was produced by Albert Engström and the connection to the crayfish is obvious, once you consider its message: "Kräftor kräva dess drycker" (Without strong spirits no crayfish!). 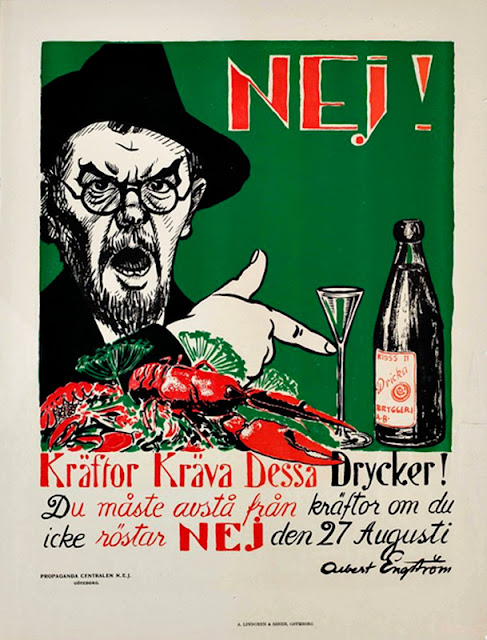 So, thanks to Albert, there will yet be a Crayfish Party next Saturday. To act as a warming up for the big event, permit me to present my personal version of the eternal truth: 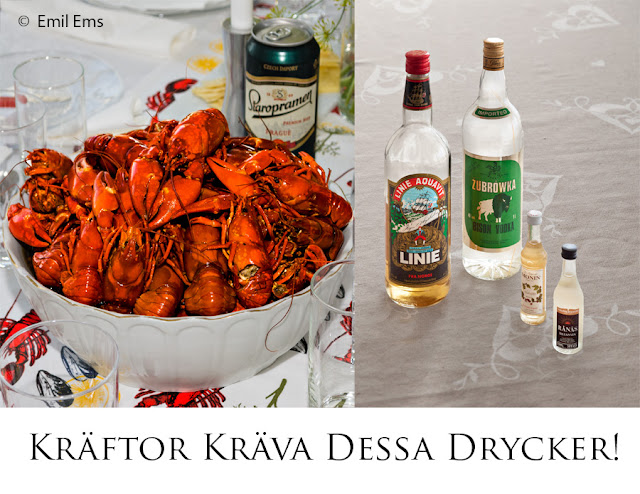 Thanks, Emil, for your marvellous pictures from the race last Saturday on the other side of the Hammarby Sound! One year ago I tried with my binoculars to discern some people I knew would participate, which was totally hopeless, since everybody was wearing blue T-shirts. This year they were all green, but this did not make it easier, so I gave up and just enjoyed the scene opposite me - however, I did not enjoy the tremendously noisy music accompanying and encouraging the joggers! Your camera really does justice to the spectacle opposite us!
Kind regards
Eva

Dear Emil,
I didn't know about the annual run or the Swedes' love of crayfish, so many thanks for this!
Best regards,
Heather (in Brussels)