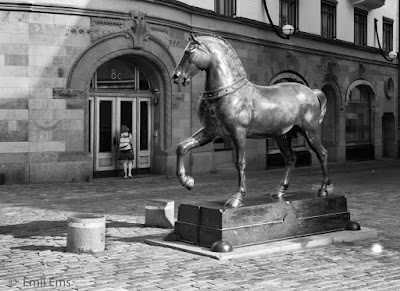 
This about ends my New Year's Retrospection; even if somewhat longer than usual, it still contains, at the very beginning, a short glimpse at my main achievement during 2018! But what about my New Year's Resolutions? Well, I am a senior citizen by now and understand the limits of my free will. What I am able to accomplish, I will of course pursue; but no pledges from my part about activities that I am well aware to be unable to carry out. Instead, permit me to put forward some pious wishes for the future. They concern the fruit of my creative labour. By this I mean, especially, the best of my Stockholm pictures.
These pictures lead a life rather more precarious than my two photographic books. The latter are safely preserved in the Swedish Royal Library, as long as that venerable institution will persist. But the fine prints I am producing will depend on the "kindness of strangers". Only if there are people gracious enough to acquire them and hang them on their wall will they have a life of their own. All I myself can do is to gift them the potential to last of up to a century, if well taken care of by their owners.

Thanks for the good work and the detailed story behind them!
Cheers, & Happy New Year!
Karl & Mugur

Love the story and love the art and love you,too! Hope to see you later this year.
All the best in 2019! Kathy

Thank you so much, Emil. Fascinating as ever. I take the opportunity to wish you all the very best for 2019. I think it promises to be an interesting year.

What a great story! I will definitely come back to your site in the future :)

Dear Emil,
Thanks a lot for your historic view on the quadriga of St Mark in Venice! I thoroughly enjoyed reading it! The connection with the horses in Blasieholmen are really striking! Thank you also for showing us your lovely pictures. I do hope your beautiful pictures of Stockholm will have a long life! Congratulations on having your photographic books in the Royal Swedish Library!
Kind regards
Eva

Dear Emil,
You are indeed a master of the long view. These four hourses have travlled from Rome, to Constantinopel, to Venice, to Paris and back to Venice over a period a 2000 years. They remind us not to take anything for granted - nor to believe that the end of history has arrived! Looking forward we should expect the map to be redrawn in Eastern Europe and in the Middle East. Hopefully, Western Europe will remain for some time as you have captured it in your photographs. But you remind us that we can no longer be sure of anything.

Dear Emil,
Thank you for this blog.
I wish you a healthy and prosperous year.
We headed during Christmas period to the warm sun of Marrakech, a special place with intensive colours and impressive architecture. A destination highly recommended for an eye like yours that can catch the beauty at every corner.
Best regards from Vienna
Mona

Wishing you a happy new year, Emil! Thank you for your insights, always perceptive, frank, and marvelous, and for your remarkable, wondrous photography.
Lillian