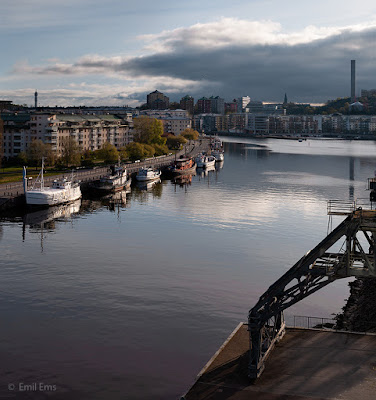 In these days of subdued social contact, when many an hour is spent in splendid isolation, and daily reports abound about the progress of the new plague, it is far too easy to fall into the trap of depressive despair.

Here in Stockholm, the authorities estimate that about one third of the population is already infected, and the death count is speedily surpassing 1500. By end of May, about half of us will have been smitten and the death toll approached the three thousands. I am sorry to say that the risk of being infected is at its maximum at the moment, forcing me to all kinds of evasive manoeuvre to keep my two meters' distance on the sidewalks and in the shops. Only us elderly seem to understand what this means in terms of keeping abreast of each other, the rest of the loiterers being happily unaware of the distance needed to avoid calamity.

So how to keep a serene attitude towards the catastrophe, in particular since one's existence is at stake? After all, the odds of me dying before the end of the year could well amount to one in twenty, a sizeable risk of a sad ending! How can I avoid getting bogged down in a spiral of negative thoughts, forever wallowing in despair? Yesterday, it occurred to me, that it may help to determinedly "fight fire with fire", so to speak. If I could imagine a catastrophe far worse than the one experienced at present, this might well liberate the mind of its wallowing and the body of its getting stressed. 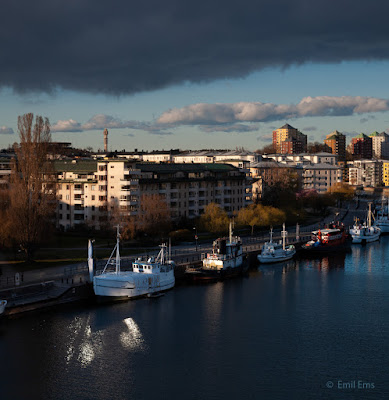 It so happens that we do not have to look far to find a candidate. The scientists' word for it is "Global Dimming". This expression describes the fact that burning of fossile fuels sends up particles in the atmosphere, which in turn shelter the globe from part of the sun's heating rays.

This phenomenon has not received a lot of attention in the popular debate on climate change. If you would like a short survey of the issues involved, I invite you to have a glance at the video below. Suffice it to say, that global dimming is usually neglected when describing the effect of various climate strategies aiming to keep down the amount of carbon dioxide in the air.

That notwithstanding, its influence on global warming could be underestimated. Some natural scientists apprise the resulting tapering down of the greenhouse effect as high as 1° Celsius! Even if the jury is still out on this number, permit me to use it as a basis for my private deliberations.

As an aside, the Corona plague has provided us with valuable indices for this tapering down. Since the use of fossile fuels certainly has diminished by at least 25% in the last three months, it may be useful to study the concurrent change in temperature on the globe, in particular in Eurasia, North America and the Arctic; these being the areas directly affected by the clearing of the skies. It so happens that the first three months of the year were characterised by warmer-than-average conditions across the globe. In particular, record-warm temperature departures (from the average) were present across Europe and Asia, where temperatures were the highest in the 111-year record (NOAA).

Moreover, consider the diagram below. It shows the seasonal melt-off of the Arctic ice shelf. This spring, the melt-off is particularly pronounced, compared to the average rate of diminishing ice. Of course, all this evidence is far from conclusive, but at least does not contradict a possibly large mitigating effect from global dimming. 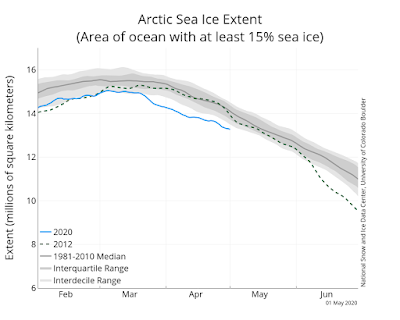 Now back to my catastrophe scenario, with Global Dimming diminishing the greenhouse effect by 1°C. Let's say that humanity were to succeed in a strategy of abolishing all use of fossile fuels within the next twenty years. Alas, since this would end Global Dimming, the resulting warming of the globe would surely hoist us above ICC's permissible 2° limit of global warming, putting an end to human civilisation as we know it.

I trust you understand that human civilisation would be doomed under all circumstances with such a high dimming effect. I simply cannot envisage any climate strategy under this assumption, which will allow humanity to escape this morbid outcome. To underpin this, let us outline another strategy. This one would consist of maintaining the present level of fossile burning, but prohibiting further increases. Such a programme would maintain the present amount of Global Dimming, but at the same time continue to augment the amount of carbon dioxide in the atmosphere. This would also lead to surpassing the 2° limit of global warming, even if it would take longer, say thirty years instead of twenty.

Now back to reality: a host of scientific articles in natural science attempt to estimate the tapering effects of Global Dimming. The results vary widely from 1° C and even higher down to the almost negligible. Surely, the IPCC must have found it probably to lie on the lower side. Why otherwise would the organisation ordain to reduce global carbon dioxide emission?

Me, I just prefer a large tapering effect in my personal "war game", just to keep my imagination off the present plague issues. Compared to the end of civilisation within a few decades, the Corona crisis appears like a small breeze in springtime. Thus, miraculously, my Corona concerns are evaporating. I clearly can have worse things to worry about than a few million deaths by a new virus. So why not make the best of the years left to us and, for instance, spend a few enjoyable moments listening to a young and spritely group of musicians, who lets us dream of a past far more promising than the future?

Hi Emiel, thanks for the very informative blog, accompanied by those beautiful views, as ever, from your kitchen window. I look forward to receiving your blogs for many years to come. Stay safe, Heather

Greetings Emil.
Well, the first video made my head hurt- as I suppose was the intent! The second was a very charming and effective counterpoint indeed. I'm sure I speak for all your friends and blog followers when I say that I fervently hope that Sweden's audacious CV-19 plan leaves you unscathed and with some robust anti-bodies on board.
Stay well, dear friend!

How are you? Just thinking about you – I hope everything is OK with you. I am OK, but Berkeley is not so OK in this situation. Lot of homeless  on Stuart Street now, most shops are closed. But Berkeley Bowl is open, so I am very lucky. I wish this goes over very soon.

thank you for this very interesting read! I'm happy that you found a method to achieve peace of mind during this crisis by imagining a far worse global catastrophe in the future. I don't think it works for me though... :)
I'm thinking of you in those plagued times, please stay healthy and in a good mood!
Nils

lieber Emil, mind games are an occupational therapy and climate change is particularly thanks to Greta Sweden efforts in the spirit of the time. Nevertheless, we yearn for normality, because for me still applies:
Leben ist Begegnung!

Dear Emil,
Thanks for your interesting comments on the virus as well as global dimming! Keep well and enjoy what spring offers us in the way of blossoming trees, flowers and plants! We Swedes are still allowed outdoor life! Our Prime Minister says this horrendous virus will stay for a long time, but one day it will be over!
Keep up the good spirit!
Eva