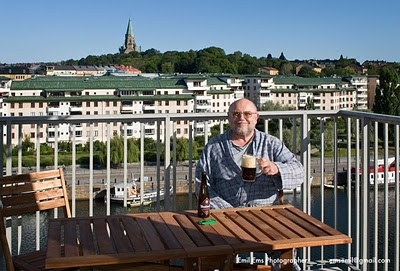 
Although I have never been an especially driven person, taking life and work more or less as it came to me, I still had to think about some other activities to fill my days, after having left Brussels. Fortunately, I have always had photography as a hobby, so I decided to make more of a profession out of this old hobby and carry out some creative projects along the way. So why not start this new professional venture at home, by documenting some nice scenery from the windows of my new apartment, as it emerged over the seasons? The background is enticing, with the sea channel merging into Hammarby Sound, and varying weather conditions will certainly provide me with ample variation in my pictures. Let’s see what this series is leading up to, and let ourselves be surprised by the ever changing picture motives occasioned by the seasons and by varying weather conditions.
Posted by Emil Ems at 11:37 No comments: 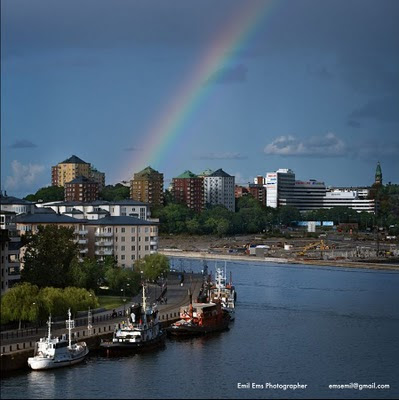 This day was very special to me, since I was arranging a traditional crayfish party in my apartment, to inaugurate it, so to speak. The guests were expected later, fortunately, for, just an hour earlier, there was a thunderstorm brewing over southern Stockholm. After a short rain the weather was calming down again and the sun started to come out from between clouds, shining like a giant spotlight on the buildings across the sound. Soon, as if destined to stimulate my party preparations, a most beautiful rainbow emerged, over the narrow outlet of Hammarby Sound (Hammarby Sjö) that lies hidden behind the apartment building to the left of the quay.
Posted by Emil Ems at 18:00 No comments: