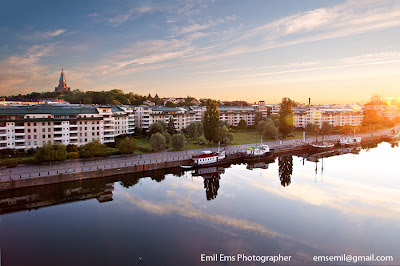 The Summer Season seems to have a profound impact on the mind of us Swedes. Not so much on people of my age of course. For us old-timers, Summer means mainly sleeping bad at night and staying sleepy during day-time, combined with a welcome lessening of pain in joints and muscles. But the youngsters become a lot more lively in the warm season with its long days; a lot of partying is going on and extending long into night and even mornings.

Yesterday morning I woke up early – as so often happens to me in June and July – and tiptoed out to the balcony to inspect the scenario of Hammarby Sound in the early morning sun, already shining at 4 am. All was quiet – no breeze disturbing the view – and I delighted in observing the sky's rosy locks being mirrored in a wondrous way by the calm waters underneath.

Suddenly, a terrible screech shook me out of my meditative trance! And, with a woosh!, a swarm of seagulls sailed by me, one of them only inches from my head. I am glad it managed to bypass me at the last instance, otherwise who knows what had happened to my scalp! The ruckus got worse by the second and gradually it dawned on my that all those birds were rising from the large harbor crane standing on the quay some 100 meters to my right. Looking at it closely I saw, to my great surprise, a whole flock of the gulls attacking some youngsters who attempted to climb the crane! Juvenile exuberance being met by angry birds, disturbed in their nesting activities, I have to assume.

Swarted by the valiant defenders, the youngsters quickly abandoned their climbing expedition and proceeded, in a rambling fashion, along the quay in my direction. With rambunctuous shouts and hootings, waking up the whole neighborhood, they stopped just below my balcony and exclaimed that it was bathing time! No sooner spoken than the first braves were already undressing and jumping into the (ice-cold) water. This suddenly sobered them up and, considerably subdued, they continued their journey along the quay. Soon, calm reigned again over the sound and I returned to bed for another hour or two of uneasy sleep. 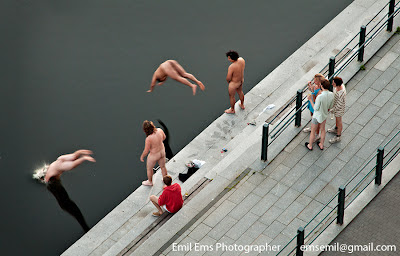 NO RAINY SEASON THIS YEAR? 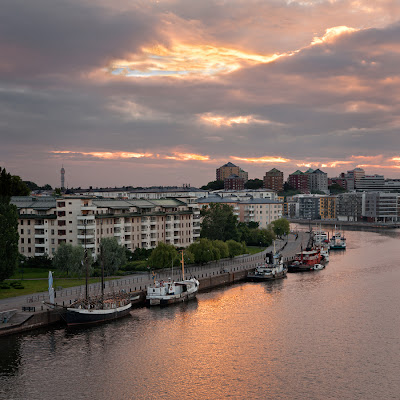 Summer weather in Stockholm used to abide by strict and never changing rules. In the first week of July, all the factories were closed, as were most restaurants and other services, and people prepared themselves for three weeks' holiday. Cars were cleaned, tents repaired, coffers packed and barbecue equipment brushed up. On first Holiday Monday, the rain would start and stay with the hardy Swedes throughout the three weeks. That notwithstanding, people insisted on having a good time and nobody complained. They knew that the sun would reappear from behind the clouds eventually, and render the working weeks in August and September more enjoyable.

These times of collective enjoyment are long gone. Nowadays, the holiday season is spread out over three months and people choose their three or four weeks within that period whenever it suits them. But the rain seems to remember those good old days and is persevering with its July exercises year after year.

This is why I was looking forward to a visit from Austria last week with some forebodings: would the Weather Gods use the trodden path once again and greet my unsuspecting visitors with a steady downpour? The weather report did not look promising; rain was foreseen at least every second day. But, unusually, it never realized. Each morning was blessed with heavy clouds or fog, but the sun always prevailed and we had warm and sunny evenings.

Have a look at this morning´s conditions around 3.15 am. Heavy clouds were hanging over Hammarby Sound, allowing barely a glimpse of the early sun. But when I am writing this, at 4 pm, the sun is again enjoying itself, swimming in a blue sky, and tickling my nose where I am sitting in front of my computer.

Lest you think that weather trends are shifting, please be informed that Southern Sweden was drenched in heavy rain yesterday afternoon. There is hope yet for a normal July Season! 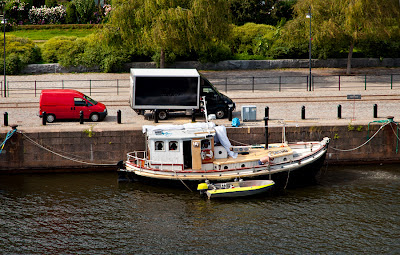