A WITCHES' BREW OF AUTUMN STORMS? 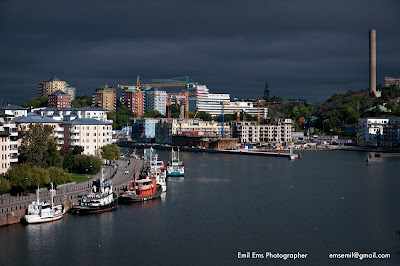 Yesterday I was back from a two weeks' sailing trip to Dalmatia. I won't bore you with details, suffice it to say that it was like sailing in Swedish summer weather, with temperatures around 25 degrees and the water just about as warm as it is around our Stockholm islands when we are being blessed by the sun. Back home I was pleased to note that my television now had access to a multitude of new channels, so I spent almost all of my first night at home with eyes glued to the screen. No morning pictures from me this time, I am afraid! A late brunch was all I could master after this night of excesses. A refreshing walk to regain vigour seemed in order. Whilst ambling along the shores, the sky got darker and darker, closing its windows against the sun as if longing for an early evening. I rushed back home early, fearing that a downpour was imminent.
As always, I hastened to document my views with the camera for your benefit. So here you have it: a sky at noon so dark that it is almost black, punctured by sharp sunrays burnishing the quay on the opposite side of Hammarby Sound. Doesn't it look as if a storm is imminent? Well you are as wrong as me in thinking so, just three hours later, the sky is lifting and the sun is spreading its benign glow over a cosy autumn landscape. This gets me thinking: we are living a year of climatic excesses here in Stockholm; the coldest winter since 30 years back and the warmest early summer ever. Will the excesses continue into autumn? If so, I am afraid that we are sliding into a period of terrible autumn storms. Let's hope that my apartment building will survive the onslaught. Last time it happened, way back in the 'seventies, my neighbourhood was completely devastated by the storm. Most roofs sailed away into an early demise and one 9-floor building got its southern wall sucked away by the storm, with balconies and all, leaving a meter of open air for the storm to howl through in peoples' living room. You may think that I am too pessimistic about this; you are probably right, but, as a former central banker, I abide by the rule to always prepare for the worst, whilst hoping for the best. 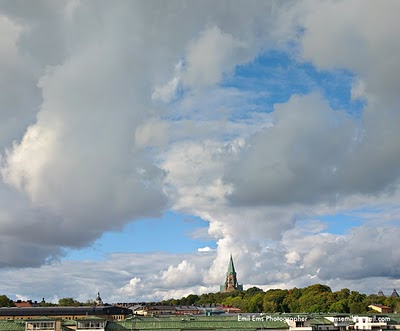 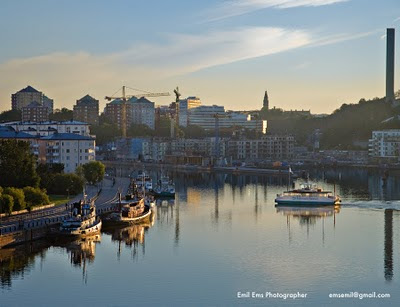 This picture looks a bit over the top, I know. But I can’t help it, this is how Hammarby Sound is performing for us on this first morning of September at 6.30. It is late in the season and the sun is shining at a low angle long into the morning; warming the first ferry boat, crossing the sound, with its indirect light; and blazing its rays at the boats anchored on the quay opposite to mine.
Looking at the ferry, steadily treading its course, gets me to thinking about the economic situation in the Western world. There are some similarities here: our economy is like a boat striving to reach the shore of renewed vigour and appears to be puffing forward at the moment, after a period’s hiatus. But can we be sure that it will reach this shore, when looking at it from afar, like the ferry boat in Hammarby Sound? I fear not! In fact, the ship is full of holes in its bottom and being kept afloat only through a steady pumping of new moneys into the system. The holes are getting bigger and the pumping getting slower. Soon we will see whether the ship will get stuck in the marches, or will succeed in making a good landing after all. Let’s keep our fingers crossed. Our pension benefits are depending on a good finish!
Posted by Emil Ems at 18:03 2 comments: