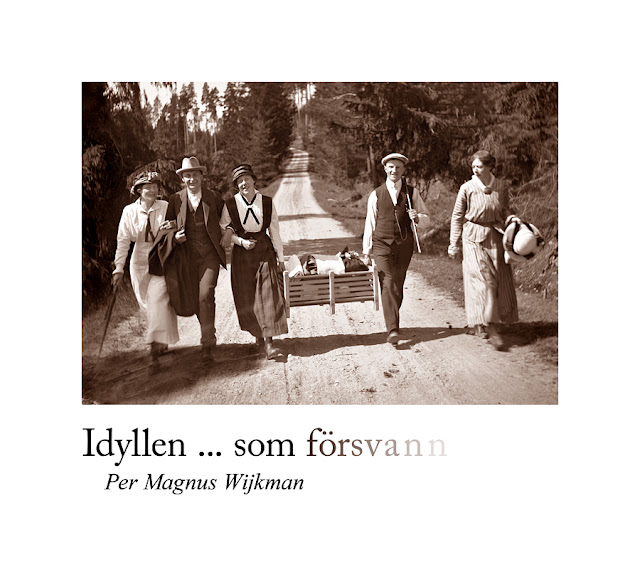 This morning I suddenly felt the urge to tell you about a wondrous experience I have had over the past six years.

It all started with an old friend, Per Wijkman – whom I have known since back in the early 'seventies – contacting me and asking me: "Could I help restore some old glass negatives from his family?". This was in 2010 and I had just begun my training in digital photo processing. I gladly agreed since the work would fit in nicely with my other schooling in the field.

It turned out to be a major piece of work, since the "some" negatives turned in fact out to be more than a hundred, all rather deteriorated by age and damage. These were pictures taken by Per's father in the 1910s. It took me about half a year to get to grips with all the pictures.


With the work on-going I got, however, to know intimately – and appreciate – the people depicted in the negatives, as well as the town they lived in – Köping, west of Stockholm, at a distance of 120 km as the crow flies –, the property they owned, the great festivities in their family, their frolicking whilst on summer excursions, etc., etc.

When the work had been finished, I encouraged Per to publish this unique set of pictures, together with a short essay depicting the general background against which they had been taken. I envisaged this as an important presentation of the "Zeitgeist" in a bourgeois family, living their happy life unaffected by the Great War that devastated most of Europe.


Per did not quite follow my advice. He is a born scholar and thought it far too simplistic to take advantage of the pictures in this way. Instead he embarked on a loong journey of scholarly research, charting his family history as well as the history of the town, Köping, where the main part of family drama evolved. The result of his five years' venture into the past is astounding.

Whereas the pictures showed a happy family during a period of about five years, with the younger generation just beginning its journey through life, his research weaved a large and detailed tapestry of family, town and property history ranging over a period of more than a hundred years – a Swedish "Buddenbrooks", even in a shorter and more modest form!


In Per Wijkman's own words: "The pictures are forward looking, full of youthful enthusiasm and faith in the future, whereas the text [in the book] is backward looking, written about 100 years later by someone who knows what happened thereafter. Set-backs and misfortunes later in life cast a dark shadow over the idyl that appears in the pictures." [My translation from the Swedish text].

When it dawned on me that a major tale was being weaved by Per, I was glad to help him design a book with the content he intended: a book, where family tale is intertwined with the old pictures and where text and images form each others' counterpoint. In this way the reader would get an enriched double view of the content; as if meeting a young love again for the first time after fifty years and viewing the mature person juxtaposed with the image still kept in your mind as forever young.


I would love to explore in detail this surprisingly rich tale, but all but a short overview would breach the frame of this blog post. In the book we learn above all about the younger generation Wijkman, all five of them, born towards the end of the 19th century.

The eldest, Per's uncle, had the good fortune of marrying a woman of beauty and character, but lost all his wealth after the stock crash of 1929. He died shortly thereafter, followed within 10 weeks by his lovely wife, leaving six children parentless.

A younger sister turned out to be a talented scholar, who went on to study mathematics and chemistry at Stockholms Högskola (the precursor of University of Stockholm). In her research she discovered already in the 1920s what later would be called penicillin, but without getting any recognition, in terms of academic honors, for her findings. Discouraged, she went to Germany to continue her research under the foremost chemists of their time. Alas, circumstances took a turn for the worse with the advent of the Nazis, and her research was usurped by colleges she had trusted. Disappointed and depressed she returned to Sweden never to retake her research, and lived the remainder of her days in desolation and poverty.

Our generation lives in a cocoon, where most of life's risks are being mitigated by the welfare state and is therefore lacking insights into what living was like in the old days; like treading on a knife's edge, where at any time a misstep to the left could mean sickness, sudden death or desolation, but a step to the right also could mean success and long life. This book is rich in examples of those turns of fate.

It is amazing that the author, at his advanced age, could gather his resources and produce such an impressive story. This leads me to an appeal: At our age, one of the few things left for us to enjoy is friendship. I am now addressing all of the readers of this blog who speak Swedish and know Per Magnus Wijkman personally. At his age, it would make him happy, if his friends and acquaintances were to appreciate the research he has done and the tale he has wrought during many lonely hours. Why not grant him his just reward and, at the same time provide pleasure to an old friend, by buying the book?

The book can be bought at BOKUS, where you can also look at sample pages, to get a first impression of this publication's quality.

Allow me to thank you in advance for your gallant support of an old friend with a tune that tallies nicely with the pictures of a happy family in the 1910s, I think. Please click on the picture to listen to the song!