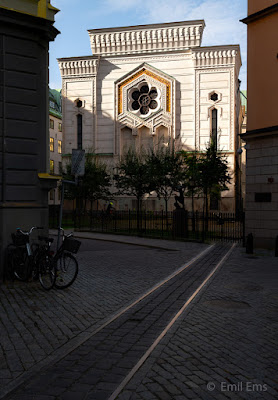 The other day I had some errands in town. This is a bit of adventure nowadays, since it involves cruising in between and avoiding hot spots of the plague. No bus or subway for me to carry me on to the centre! Fortunately, Stockholm is a seaside "resort", so I could take the trusted ferryboat "Emelie" straight into town.
When I was ready to make the return trip, there was a fifteen minutes' waiting time, which I used to loaf through the neighbourhood around the ferry berth. I had done so many times before, but this time "the light was right", with clear late morning sunshine. Suddenly, I came to an abrupt stop: before me, a mysterious pathway was spreading out, leading straight into the courtyard of the Stockholm Synagogue. It looked a little bit like a railway track, with the rails gleaming in the shadows. Bringing glamour to it all, the temple's exotic facade was blazingly light, as if a higher power were beckoning us to savour its glory and enter its domain. 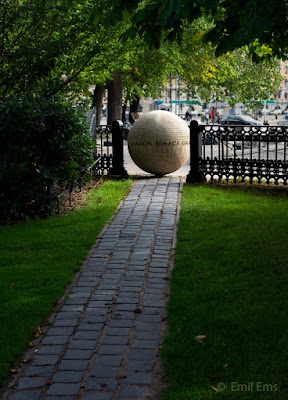 Turning around, the path suddenly changes shape, becoming more like the paved path of a medieval churchyard. At its end, a huge ball of granite seals the passage, as if reminding us that everything on Earth comes to an end. All in all, an impressive – and intriguing – piece of art.
Looking closer at the granite globe, it appears that it is fully covered by script, a bit like a modern time rune stone. Not only that, it is also polyglot, showing the same sentence over and over again. By now you have grasped the rationale of the blog title, I gather! The sentence is alluding to the fact that railroad tracks mostly run straight ahead, as indeed they did when transporting gaunt and parched victims by the million to barbaric oblivion. 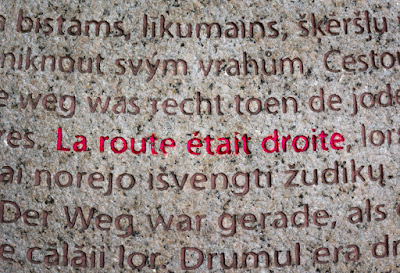 We are investigating a monument, a piece of art really, that the Government had built in honour of the victims of the comprehensively planned slaughtering of a whole tribe of humans by the Teutonic "Übermenschen". To my mind, it is a rather fitting and decent composition.
A large inscription on the globe, where it faces the "route droite", reads as "Aaron Isaacs Gränd" (Aaron Isaac Lane). This lane is a narrow passage between the synagogue and its adjacent building, starting about where the path goes into the gated grounds (see the title picture). On its walls, some 8000 names appear, chiselled in with love. These are none other than the slaughtered relatives of Jews having escaped the Holocaust by fleeing to Sweden.
Returning to the globe, and contemplating its large inscription, we begin to grasp more fully the decent humility of the monument. Its task is simply to point to the memorial in the lane. Thereby, it acknowledges that the mourning of dead relatives is owned by the survivors, not by the uninvolved bystanders. 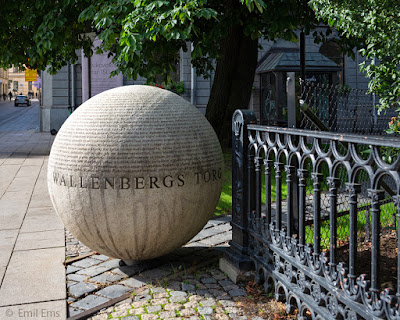 Stepping outside the confines of the monument, we see that the large inscription on the globe's backside now reads "Wallenbergs Torg" (Wallenberg Square). We realise that the ground here was found appropriate for honouring one of the precious few that stood up for the persecuted tribe. Raoul Wallenberg was a Swedish envoyé in Budapest during the last year of the War and heavily engaged in saving as many Jews in Hungary as he could get hold of, that is, thousands of them. He did this by issuing them Swedish Passports, and thus granting them immunity from persecution.
It is an irony of history that the Soviets took him for a spy and ferried him off to Lubljanka, to eventually let him fade away in those dungeons. The hapless Swedish Government led itself be deceived by the Soviets and did nothing to relieve him. Neither were his noble deeds notably acknowledged in Sweden, that is, not until the US Government publicly honoured him as one of the heroes standing up to the perpetrators. He was made Honorary Citizen of the US by Congress in 1981. Thereafter, the sluices were open and honour after honour has been bestowed upon him all over the world.
Naming a square after Raoul Wallenberg here in Stockholm, albeit belatedly, and adorning it with a collection of bronze sculptures, appears to me a fitting way to make up for hitherto neglecting a truly heroic Swede.
Posted by Emil Ems at 10:47 12 comments: