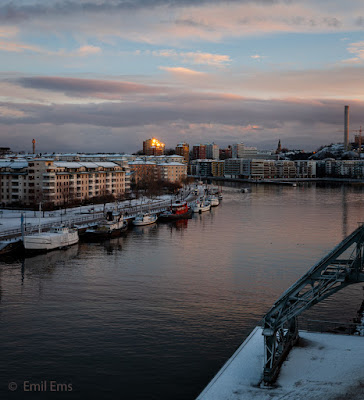 This time of the year we sometimes are subject to a peculiar phenomenon occurring in the Northern regions. It is February and, whilst  the morning sky is getting brighter, day by day, the air keeps getting colder and colder. The days are often sunny and dry, but very cold, with temperatures having difficulty to rise from nightly lows of around -15° C. All in all, these are conditions far preferable to the ordinary Stockholm winter, when temperature is alternating between +1° and -1°, with a lot of slush to wade through, and icy spots to break your bones on, whilst taking your daily walk.
The above experience appears to me an apt metaphor for the present Corona malaise. On the one hand, more and more people are getting vaccinated and saved from the Plague; on the other, a recent mutation of the virus, much more aggressive and deadly, is getting closer and closer, having engulfed all of Albion to the West already, washed up on the shores of Ultima Thule and led Svithiod (Sweden) to close its portals to the outside world; in vain, it turns out, since the fiend is harrowing us already from within.
But back to reality: the other morning, I noticed a peculiar apparition from my breakfast table. On Hammarby Canal, towards its West, a huge ice floe had formed, finely powdered by light snowfall in the night before, and moving slowly but surely Eastward towards Hammarby Sound. The water in the Canal is essentially freshwater, since it is being replenished periodically from Lake Mälar, whenever the large lock between the two is being operated. Thus, it tends to freeze over sooner than in the Sound, which contains mostly brackish water from the Baltic.
As I was geting on with breakfast, 25 minutes later, the wandering floe had already entered the Sound ...
... where, after another ten minutes, the ferry crossing over had to traverse it. With some crunching, the ship was cutting it in half. At the same time, it forced the floe along towards the opposite shore, where it joined the firm ice already hovering there due to freshwater being fed into it from the upper lakes on the plateau.
Only rarely can we witness a complete freeze over of Hammarby Canal; it occurs usually on a calm Sunday morning, when temperatures in the night before have hovered well below -15° and no vessel has yet trafficked the narrows. The picture below was taken five years ago and I was lucky to catch it with just one small boat cutting up the flat surface.
Looking at that picture now, it appears to me as another apt metafor for life in the times of the Plague. Each and one of us has to labour on, in self-isolation, looking forward to reaching the “open waters” of the company of others and social togetherness.
Let me take the occasion to deal with yet another facet of living with the Plague as a solitaire. Even if aspiring to be a world citizen and being, admittedly, a Swedish national, I feel drawn back to my place of birth off and on. To me, self-isolation has no great disadvantages in daily life, since I am a loner by nature and live by myself anyhow, even in ordinary times. But, I would age prematurely and certainly have a shorter life span if I were permanently prevented from revisiting my place of origin at least once a year. Last year it proved impossible to go back there, and it may remain impossible this year as well.
So, as consolation, I listen from time to time to a tune that deals with the issue. I admit that many of You Readers will have difficulty understanding the impact of this song. But, rest assured, it means the world to a lot of the German speaking people in Europe (about a hundred million all in all), just as this song means the world to the Swedes. Its refrain goes like this:
I wüll wida ham.
I fül mi do so alan.
Brauch ka grosse Wölld.
I wüll ham noch Firscht'nfölld.
I want to go home again.
I am feeling so lonely here.
Don’t need the world at large.
Just want to go home, to Fürstenfeld.
For most of the about 100 million impacted by the song, the word “Fürstenfeld” just stands for “Heimat”. For me, it stands for exactly what it is. It so happens that the hamlet of Fürstenfeld lies just half an hour on bicycle away from my place of birth. So I trust you understand that this tune means the world to me as well. Enjoy!
Posted by Emil Ems at 23:13 9 comments: