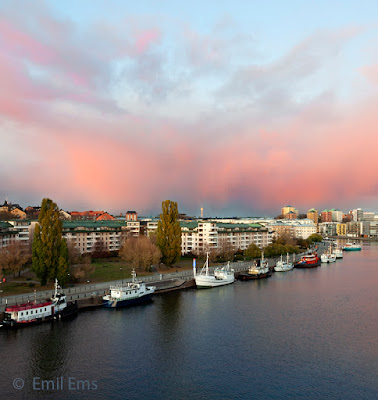 It was Friday 29 November, around 4.30 pm. I had just come home from a visit to town, when this Caspar-David-Friedrich-like view enticed me to step out on my balcony and fire away a shot. Such scenery late in the year is quite uncommon at our Nordic latitude, which got me thinking. Soon my musings took some quite philosophical, if not melancholic turns, centering around the German words Abendland (Occident) and Abendrot (Sunset glow). There is no good way to translate these two alliterating words, which explains the German title of this blog.

The Teutonic language may appear rather unwieldy to outsiders, but, in the present context, it seems a bit prophetic; don't you agree? In literal translation, Abendland stands for "evening-land", which rather aptly describes the state Western civilisation finds itself in at present. Just a decade ago, Western supremacy appeared almost self-evident, whereas, at the beginning of the new decade, serious doubt is creeping in and the Orient (aptly called Morgenland, "morning-land" in German) seems on the rise and on the verge of take-over. This would be quite acceptable, if the change in leadership took place in an atmosphere of peaceful competition, guided by international consensus, but, increasingly, a more morose future may unroll, with increasing risk of violent confrontations between the winners and losers of the global power game.

Even if such risks tend to frighten me, I usually console myself with the insight that nobody, least myself, can foresee the future; so there is no meaning in getting anxious about possible chains of event that, however worrying, never may materialise in the real world. Especially since, at my age, there may not be enough time left for path-breaking global changes to play out with me being around.

The more reason to redirect my thoughts to happenings closer in time and to home. In my own time-zone, I have reached more definitely my personal Abendland. At the mature age of 75, which I reached just a week ago, I think it proper to enter into full retirement at long last. But haven't I been a senior citizen for ten years already? True enough, but there is one official position that I have been holding on to and will leave only today, on year 2019's final hour.


To explain what I am talking about, I have to backtrack almost five years. At an event, organised by the Swedish Fulbright Alumni Association (SFAA) in early 2015, I happened to bring along some copies of my book "Fiat Lux!", and gifted one of them to the staff at Fulbright Commission Sweden. Now, you, Dear Readers of my blog "Déja vu", know already that this book is about revisiting my time as Fulbright Grantee at UC Berkely back in 1976/77. This may explain what happened thereafter. Half a year after the event, out of the blue, I got a phone call from the Ministry of Foreign Affairs, asking me whether I would be interested in becoming a Board Member at the Commission. I gladly accepted, had I not been a Grantee myself and benefitted greatly from the study year in Berkeley made possible by my Fulbright Grant? Time to pay back!

During the four years since, I have been a grateful and diligent Member of the Commission Board, putting my decades' long experience as researcher, university teacher, and Swedish and international civil servant to good use when advising the Commission on its affairs and, in particular, when participating in evaluation and selection of the students and scholars from Sweden and the US to benefit from this grandiose exchange experience. But, all good things have to come to an end, eventually. For me, attaining the mature age of 75 seems a good stopping point, apt at handing over the baton to younger capacities. Still, I will sorely miss the Commission, with all the good work it is doing, and wish it the best of luck for the future. 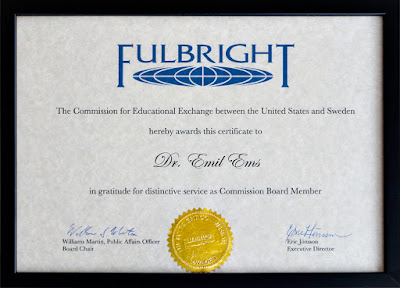 Thus relieved from the burden of work, let me move on to more creative themes. At my age, sleep comes lightly, so am always awake and ready to start the new day around 7.30 am. Shortly after 8 am, you will find me sitting in the kitchen, sipping coffee in peace and admiring the ever changing carpet of Hammarby Sound rolling itself out before me. The month of December is especially interesting in that respect, since the morning light is fading away ever faster, the closer the days are to their Nadir, on 21 December. So, let me show you what that does to my morning view, as appreciated shortly after 8 am.

In the beginning of December, there is still clear morning light greeting me with fervour. No need to put the lights on for my newspaper reading.

Four days later, the scenery looks already a bit different. It is not really daylight yet, so I have to keep the lights on, even if newly fallen snow helps to keep the view reasonably clear and fancy.

Another four days later you begin to understand, why we residents in Sweden often are in a somber mood. It is not funny to barely see the light when sipping your morning coffee!

So this is about as bad as it gets, just 5 days before the Nadir. No need to wait for 21 December, it is still night even now, when I am trying to get my act together over coffee.


"Wenn die Not aufs Höchste steigt, Gott der Herr die Hand uns reicht". The noble words of Adelheid Wette come unbidden to mind, when sipping coffee and experiencing this first sign of a new beginning. We are just four days past the Nadir, but a partially clear sky permits a "foreglow" of the sun, which is still hovering below the horizon.


Finally, this fine morning, eight days past the Nadir, brings tidings of a rosy future! Who am I to question such a hearty encouragement?

But, I see that New Year's Eve is rapidly approaching its finale. The first rockets are already sprinkling Southern Island with light, my neighbours are stepping out on their balcony to admire the  midnight firework, and corks are popping out of champaign bottles. So, without further ado, permit me to wish you all, Dear Readers,