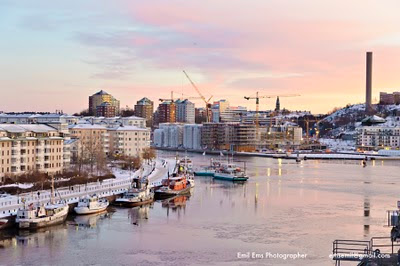 Barely had I foretold a mild winter season in the latest blog post than weather conditions changed again abruptly. The harsh Polar High is back, edging uncomfortably close to the Icelandic Low, and impeding the western winds that bring mild and humid air to Stockholm. We are again shivering at temperatures in the minus tens and ice is anew forming on Hammarby Sound, as can be seen in the picture taken this morning at 8 AM.
I think I have had enough of this! This weekend, off I will go to warmer climes. Gran Canaria is beckoning with unusually green coasts (due to early winter rain). If you would like to follow me on my voyage, have a look at http://emilsfelicitousisle.blogspot.com/ where I will keep a diary of the trip.
Posted by Emil Ems at 15:51 3 comments:

RETURN OF THE SLUSHY SEASON? 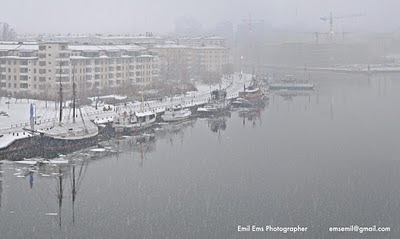 You may recall that my earlier posts this winter have delved into matters of extreme cold and related idiosyncrasies. This discussion topic may soon be left aside, I believe. During last week, the last piece of ice on Hammarby Sound has dissipated, foreshadowing a more normal Stockholm winter. And indeed, when looking out of my window this morning at ten, I was greeted by an intense wet snowfall, of a kind well remembered from winters past.
Despite its location way far to the the North of Europe (Stockholm has about the same latitude as Kodiak in Alaska) my hometown usually experiences mild and slushy weather all the way through March. This is due (1) to the Gulf Stream that caters for the Atlantic to be cosily warm and ice-free up to Murmansk in Russia and (2) more importantly, to the GRAND NORTH ATLANTIC OSCILLATION (well, it has to be grand, with such a denomination!).
So what does this grand wording mean? For reasons apparent only to experienced meteorologists, a permanent low pressure zone seems to reign over Iceland, being balanced by an equally permanent zone of high pressure far to the South over the Azores. The imbalance between those two acts as a giant ventilator, pumping wet and warm air with great insistence westward over the North Atlantic and over Southern Scandinavia. This translates into an oscillation of rain and wet snow falling over Hammarby Sound well into March. Temperatures usually waver around the zero point (in Celsius terms) and would be quite agreeable, weren't it for the constant humidity either hovering in the air or falling upon us as slushy downpour.
Why then did we experience such a long time of rather extreme cold lasting until last week? For this we have to blame another weather zone, the GRAND ARCTIC OSCILLATION reigning over the polar regions. Off and on, an arctic High that you can liken to a mighty ice bear, is getting tired of his position on top of the world and moving sidewise into Iceland, which has the effect of stopping the westward pumping action and replacing it with northerly winds, blowing icy cold over poor Stockholm. Last winter, he located himself uncomfortably close to Iceland for a prolonged period, leading to one of the harshest cold seasons in Stockholm for decades. We had our expectations up also in the current season, hoping for another Jack Frost to lead us into March, but it seems that this will not be the case, we probably will have to content us with the Slushy Season.
Posted by Emil Ems at 12:20 3 comments: