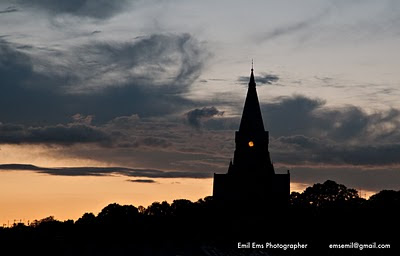 The picture you are looking at shows Sophia Church (Sofia Kyrka), just opposite, and due north of, my apartment in Stockholm. As you can see from the church clock, it is precisely midnight. I arrived back home, after 12 weeks of travel, on the evening of 22 June, just some twenty minutes before taking this photo. For you, dear readers, not familiar with Sweden and its peculiarities, you are witnessing the famous white night of the Nordic midsummer.
All was quiet on this blessed occasion. The sun had, of course, already set, but was ambling along, slowly but surely, just a wee bit below the horizon, keeping the northern sky full of light, against which the church tower stood as an enticing silhouette. Suddenly, birds started to twitter, as if being confused between dusk and dawn. And right they were in being confused, since dusk merged with dawn without an intermittent period of dark. Soon the zone of lightness would pass the church and amble towards the right, getting more brilliant along its way until, an hour later, the first golden colours of the sun would start colouring its lower fringe, announcing the newly borne day. But at midnight, Hammarby Sound (Hammarby Sjö) to the right of the church was still spared the sun, being bathed instead by the vermillion of predawn. 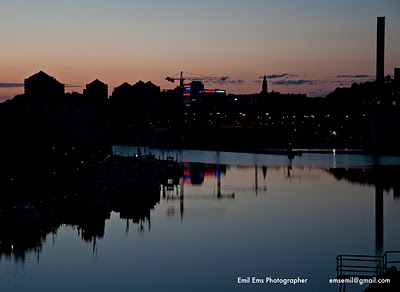