Another fine morning over Hammarby Sound! This time a bit later than in the preceding post, since the sun is already shining and welcoming. The more welcoming since we are in the middle of a period of intermittent cloudiness and drizzle. It seems like the world has been born anew, so fresh is the air and so quietly inviting the sky, with clouds thawing away in the morning sunlight.

Whilst enjoying the view – a bit like savoring a glass of rare sparkling wine – it occurs to me that the precise word "Sparkle" comes in very handy for summarizing the overall experience!


As humans we are inclined to love sparkling experiences, be it in the form of a morning view from our balcony or savoring glitter in fellow humans. I have to confess that I share the latter inclination – morosely disposed as I am –, always longing to interact with personalities of a harmonious disposition, with an engaging smile and with eyes glittering.

You tend to notice and appreciate such people foremost when they are young and of the opposite sex (if your leaning is mainstream). There is of course a reason to it. Youth in general has an optimistic view of life, and is therefore more geared towards showing an expecting smile and inviting eyes. Moreover, your eyes tend to be colored by your instincts, which greatly enhance your perception of enticing characteristics in the smiling youngster. 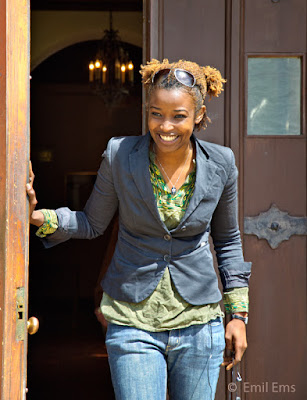 But there is more to it than youth and sex, let me assure you! A small minority of human beings, a few, a happy few, have a harmonious and optimistic disposition ingrained in their being and manage to keep this disposition all their live. If you don't believe me, let me give you an example, the more relevant since the lady in question would have her 100th anniversary this year. I am of course thinking of the famous Swedish actress Sickan Carlsson, who outshined – in sparkle – more morose contemporaries like Greta Garbo, Ingrid Bergman and Zara Leander.

I invite you to have a look at the video below, where she is performing at the mature age of sixty. Please have a glance even if you do not speak Swedish! In fact, you will get the picture better when concentrating on the singer's engaging smile and glittering eyes, disregarding the meaning of the song!

You may respond that Sickan is an actress, and as actress perfectly able to impersonate a shining personality for the time of an act. But there are testimonials from people having met and known her over the years, ensuring us that she was just as positive and shining in private as she was on scene.


Having reached this far in my ramblings, disclosure is in order. It was my supreme fortune to be loved by a woman with the same disposition, my former wife Alice. Like Sickan, she had it ingrained in her being; and her positive and sparkling personality did wonders to this morose blogger.

When I first met her, it was like the sun was rising for me for the very first time. Over the years, I never ceased to bath in the glory of her smile. This is not the time nor place to elaborate this further.  Suffice it to say that Alice kept her persona sunny and sparkling way up into mature age!


I am again in Stockholm since two weeks back and am enjoying the "white nights" of Sweden's Summer. Temperatures are agreeably temperate, I am glad to say, hovering around 20° (Celsius) in daytime and cooling off nicely during the night.

My apartment lies smack on a seafaring road, which provides me with never ending panoramas for putting on this blog. But it has its disadvantages, especially if Summer nights become hotter and more inviting. If that happens, the normally restrained Swede turns into boisterous "Southener". Juvenile frolicking crowds tend to congregate on the quay just below my balcony, feasting, drinking and singing way into early morning. But not this week at least; serene calm is reigning, at least after midnight.

Sleep does not come easily, even so. Today, I woke up already around 3.45, by seagulls eagerly screeching to rouse the resting old-timer. But I was glad to get up, looking at the forerunner of a raising sun on the Eastern horizon.

The warm pastel colors of the sky suddenly made me think of an old song, "Le temps des cerises". This may be a surprising association, but I was not thinking about cherries, with their intensely red color, but rather about the color "cerise", much like the color of the low horizon in the picture, even if more rich and saturated.

From the color "cerise" there is but a small step (in thinking terms) to take to the above mentioned famous song. When I looked it up on Youtube, I found a Greek singer who gave an intriguing interpretation of it. Her name is "Nana Mouskouri" and she somehow found the right tone between romanticism and revolutionary verve that characterizes the text of this genuinely French chanson.

Now, the Greek, more so than present day French, still seem to linger in a dreamworld, a mix between romantic delusion about past grandeur and anarchistic longing for changing the world, rather than themselves. So what better song to sing for a Greek than this: