A VAINGLORIOUS ATTEMPT AT MASCULINITY?


No one living in our cosy little neighbourhood of Sjöstaden (with 25 000 inhabitants, but still cosy) can help notice this "middle finger" being raised at us, whilst we are taking the tram to subway station Gullmarsplan. It is an enigma to me why architects and building companies hunger for raising such an outlier at odd places in Stockholm. This will be the third scraper raised, with at least three more in the pipeline.

I ask you: why on Earth did the city authorities authorise this extreme case of one-up-manship? It is as if largesse in size is equalled to grandeur in style by the town officials. Anything higher than 20 floors goes, if there is but an empty building site allowing for it. Unfortunately, city officials' understanding of urban aesthetics is hardly shared by us poor suffering citizens.

Aesthetics aside; did the town planners think about the logistical nightmare being created by this outsized sugar top? Close to where its feet are planted into the Earth, there lies one single small roundabout, which has to accommodate, on the one hand, all morning and evening traffic flowing to and fro our neighbourhood into town, and, on the other, all the cars coming from Southern Stockholm and choosing to travel to downtown, using the small bridge across. Already without the new scraper and surround, with its forthcoming 6000 working places, this roundabout is hardly navigatable during rush-hours, with huge queues backstopping way into our neighbourhood. Imagine what will happen with the abrupt increase in car traffic created by this new development. 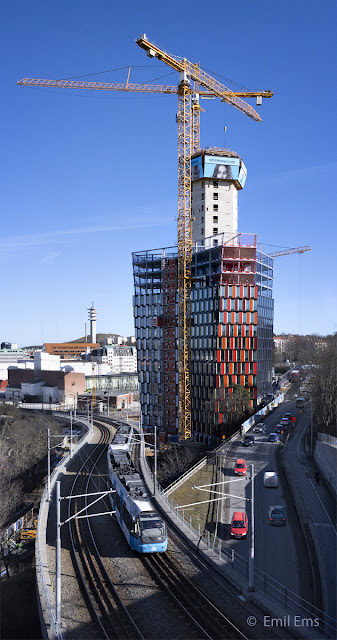 I am sorry to say, that there will be NO ROOM to enlarge the roads around this abomination of a city plan! Every single square meter of the necessary space is already occupied. What were town planners thinking when approving this building project?

You may conceive of me as being a hopeless nostalgic, forever opposing progress. And I am forced to agree, even if my reaction to this unnecessary and molesting skyscraper appears to me more rational than affective. Still, I think it is better to be a nostalgic, wishing to keep hold of all that is pleasant in the city, rather than embrace "progress" that implies getting rid of what is pleasant and replace it with abominations!

An old song comes to mind, which will help me to underpin my position. Unfortunately, it is in Swedish, based on an Italian original. But allow me to reproduce and translate here the core lyrics of the tune:

Lucky Street, you exist no more.
You have disappeared with the entire neighbourhood.
The game has ended, the song has subsided.
High above the ground floats the concrete.
When I came back everything was so changed,
trampled and plundered, damaged and desecrated.

Shall between these high risers one day rise a song?
Equally wondrous and beautiful as the one we heard once upon a time...


Will a song rise around the Sjöstaden high riser one day?
I doubt it!