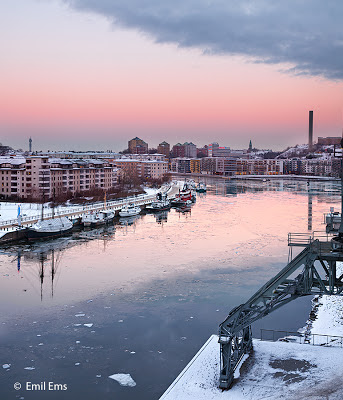 Yesterday afternoon, around 3.30 pm, I saw a surprising scene, when returning from my luncheon walk. The Eastern sky was bathed in a rosy shine, quite unexpectedly, since the sun had already set in the West. This type of phenomenon, a delight for all photographers, is called "Alpenglow". You may have guessed that the term stems from the German "Alpengglühen", describing the rosy shine on the eastern fringe of a mountain or mountain range, which originates from clouds on the Western horizon aglow with fiercely red, illuminated from below by a sun already set. These red clouds act as a giant diffused floodlight casting a rosy shine on any large promontories and, indeed the sky itself, above the horizon to the East.

After having admired that view for a long moment, I turned around, expecting a fiercely red sky as the source of the rosy shine. To my surprise, no such "floodlight" was discernible, since the horizon to the West was fully draped in grey clouds. How could this be? Well, in the case at hand, the Alpenglow was caused in a different, more sophisticated manner: the sun must have set just a few minutes earlier. The atmosphere, loaded with moisture in the form of a myriad of icicles, deflected the fringe rays of the sun already set so that they still reached a "projection screen" formed by icicles  on the Eastern horizon.

I am blessed with having an apartment with a view. Nature is providing us with endless variation of vistas, even when looking at exactly the same landscape day after day, year after year. This is a great consolation for me and assists in coping with the travails of getting old, making me forget the ever increasing creaking of the joints and ever decreasing vitality that follow from aging.

But there are other ways to cope with seniority. During the holiday season I had remodeled the apartment into a "photo gallery", mounting some 35 enlargements of pictures from my book "Fiat Lux!" on the walls. At several occasions, I had invited family, friends and acquaintances to Open Houses, with picture viewing, slideshow and general entertainment, and I am grateful that everyone participating had a lot of fun at the events, not least myself. Now it is time to free the walls again and start thinking about new ventures to fill the days.

My next project will be to revisit the black/white negatives which I have produced over the past 30 years. In those glory days of film photography, I used to work with large format cameras, that is, with negatives of size 4x5 in. and 8x10 in. Unfortunately, I could not, in those days, afford to buy an enlarger for those large negatives, so they are sleeping the sleep of the righteous in their archival sleeves. Time to wake them up; there is work to do, scanning them and treating them with digital processing. Eventually, there will be a new book coming out from the printer, but it may take a year or two.

That's all for today, folks! But "No!", we have to finish first our story and tell about the weather having been foreboded by the Alpenglow. When I woke up this morning, I was very surprised to see heavy snowing once again. Let the picture below bear witness. The snowfall had started already after midnight and continued the whole day long. In its build-up and concurrent clash between freezing and temperate air the afternoon before, the conditions for a sophisticated Alpenglow must have been shaped, to our great enjoyment! 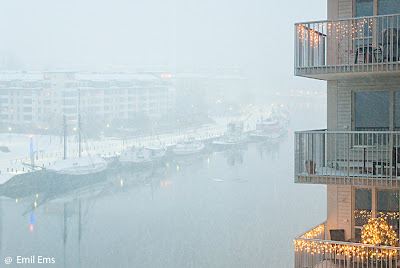