I HAVE BEEN WAITING LONG TIME FOR THIS! 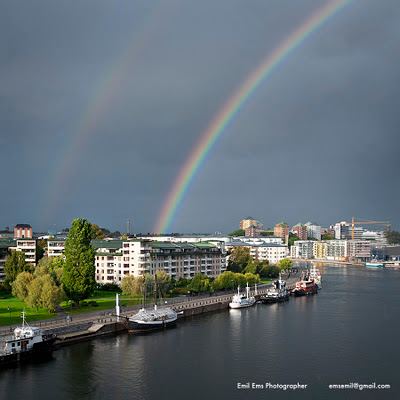 Rainbows are among the most endearing landscape motives to capture on film, but also the most difficult to render. You may recall that I had the good luck of seeing my first rainbow over Hammarby Sound already shortly after moving in, back in August 2009 (Rainbow over Hammarby Sound). But there was a certain dearth of those wonders of nature further along; let's face it, there has been no single picture of a rainbow since then. Well, I simply was never at home, or when at home, never looking out of the window, when these dramatic views appeared. They are not so rare, after all.

But this autumn I was doubly blessed. Already three weeks ago, the first lucky moment arrived, with not only one, but two of the beauties manifesting themselves at 4.20 PM. The second occasion came today, just half an hour later in the day. But that half an hour, together with the three weeks' delay, make quite a difference in the general appearance of the motive, don't you agree? As landscape photographer, you have to be grateful for whatever light is prevalent at the moment, and make the best of it in post-processing. But nothing compares with mother nature when it comes to proper dressing of a dramatic scenery! 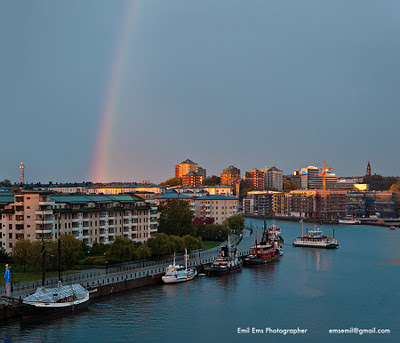